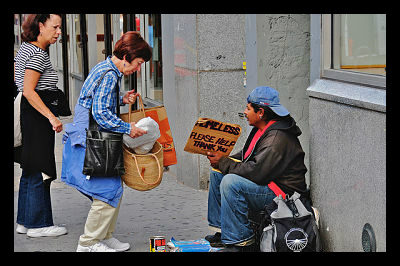 Murder rates are much higher in large cities compared to in smaller towns. In general, violent crimes are more prevalent in heavily populated areas, in particular, impoverished urban communities.

In densely populated areas, crime rates can be influenced by the increase in peer contact. Individuals have more contact with one another, which allows for the potential for more crimes to be committed overall. An urban setting also entails more bars, convenience stores and other vulnerable businesses meaning there is an abundance of potential targets.

Statistically speaking, gender affects the number and types of crimes committed. On average, males commit more street crime than females due to the socialization to be aggressive and assertive. In addition, younger individuals commit at a disproportionate amount of street crime, in part because of peer influence as well as their lack of desire to conform.

The most targeted and vulnerable of the population is the poorest of the poor: the homeless. The abuse, death and crimes against this population is often undocumented.

In recent years, there has been an increase in the number of violent crimes committed against the homeless. “Bum fights” are a new phenomenon where people videotape their attacks against the homeless for entertainment. The more recent and violent attacks have gotten the attention of the United States Justice Department, which acknowledges not only that this a growing and serious national issues but is also a hate crime. However, the homeless are not considered to be a federally protected class.

Crimes committed against the homeless are brutal and violent and include but are not limited to drowning, burning, shooting and stabbing.

Factors that make the homeless more vulnerable includes a criminal’s lack of discrimination against their victim; in essence there is not a targeted victim. Given a lack of trust in the police on the part of the homeless, many of these crimes go unreported. Homeless individuals become easy targets. Environmental factors also impact a homeless individual’s vulnerability. No walls, locks or keys and a transient lifestyle increase the likelihood that a homeless person will be targeted and become a victim.

​Crimes that target the poor and homeless are a problem in the United States. Support for legislative change and policy updates that allow the homeless to be considered a protected class is the first step to help this population.