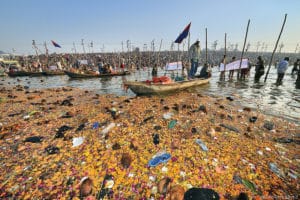 Plastic waste in India has collectively reached 8.3 billion tons throughout the past 70 years. This is inclusive of plastic bags, plastic bottles, packaging, straws, spoons and forks and much more. To picture how much 8.3 billion tons would look like, compare it to 1 billion elephants or 822,000 Eiffel Towers.

Plastic Poses a Threat to the Sea Life

This immense amount of plastic waste in India often ends up polluting the Arabian Sea and the Indian Ocean. It acts as entrapments to the natural habitats. When ingested by fishes, the chemicals that compose the plastic poisons them and make them inedible for consumption. In other cases, plastic packaging such as the rings for canned sodas pose as a threat to wildlife like Turtles as it can strangle them. Additionally, the sea creatures view plastic waste as predators that interfere with their natural food consumption. This makes these animals starve as they find it difficult to approach their natural food source.

Plastic Waste in India Affects the Livelihood of Fishermen

Fishing is one of the primary occupations for people living on the coasts of India. For many, that is the only source of income. The problem of plastic waste in the sea is affecting the livelihood of fishermen to a great extent.

Recently, fishermen and women in India have begun to filter through, wash and sort the plastic collected from the sea. Those that are too damaged or far too recycled, are further recycled. While the plastic that is in near-perfect form is shredded and sold to construction companies. It is shredded into a consistency finer than confetti and used to build up the asphalt used to pave roads.

There are various benefits to using recycled plastics over regular plastics, especially in terms of constructing roads. By using recycled plastic, one can save approximately 1 ton of asphalt. In addition, cost wise, it provides approximately 8 percent profit. Furthermore, addressing the influx of plastic waste in India paves way for new jobs for many unemployed citizens.

In terms of quality, roads constructed with the help of recycled plastic tends to be more durable against weather conditions such as floods and high temperatures. A variety of smaller plastic shredding businesses have risen in order to support this new form of construction.

The Process of Utilizing Plastic Waste

The process involved in constructing roads from recycled plastic is relatively simple. First, the different kinds of plastic wastes are sorted, cleaned and dried. Then, it is shredded into a fine confetti texture. After that, it is melted at 170 degrees Celcius. To this, hot bitumen, a mixture used to build roads, is added. Once this mixture is complete, it is further mixed with asphalt concrete and laid out into foundations.

This technique of utilizing plastic waste to build roads has been already put to practice in 11 states throughout India. Some of these places include Halls Road, Ethiraj Silai Street and Sardar Patel Street. Currently, 100,000 kilometers of roads have been built.

One of the leading cities to implement this technique is Chennai. So far, 160,000 kilograms of plastic have been reused. In turn, 1.035 kilometers of road has been built. By following the mantra of reduce, reuse and recycle, plastic waste in India is being redirected to better the country.