Tag Archive for: Builders Without Borders 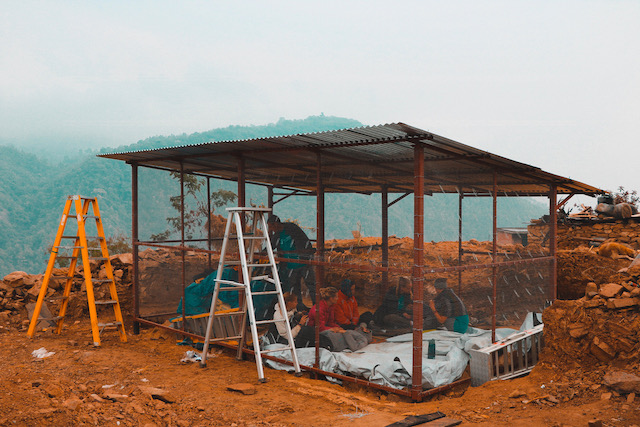 What are Straw Bale Homes?

The earliest evidence of straw bale homes can be dated back to the Paleolithic period in Africa, but it continues to be used throughout the world. Straw bales are relatively cheap, provide excellent insulation and are naturally fire-resistant. When the plaster is applied to the straw structure, its relatively thick walls become an impenetrable fortress to sound, moisture and fire. Another benefit of this type of construction is its ability to resist the stresses of tectonic activity. The width of the bales themselves creates a wide solid footprint for the structure. The organic makeup of the bales allows for maximum absorption of seismic forces. Researchers built a full-scale straw bale based home for a series of shake table tests and applied forces twice the amount of what was measured during the 1994 Northridge, California earthquake. The structure, while damaged, still showed no signs of collapse.

Straw is widely available and cheap, often the byproduct of many agricultural processes. Thus, it is the perfect material to be used in impoverished areas where earthquakes are prevalent. Pakistan is located in a highly active seismic area, experiencing hundreds of earthquakes per annum. It is also a region where nearly 40 percent of the population experiences multidimensional poverty. Homes are built cheaply and lack structural components necessary to combat seismic tremors. This ultimately creates a death zone when large tremors strike.

The most devastating incident was in 2005 when a 7.6 earthquake rocked the Kashmir region, killing 80,000 people and leaving another 4 million homeless. This disaster led to the founding of the organization Pakistan Straw Bale and Appropriate Building (PAKSBAB). PAKSBAB has trained 70 people in straw bale construction. These people continue to build seismically-safe, affordable and sustainable homes that house micro-to-small-income families.
In April 2015, the citizens of Kathmandu, Nepal nearly suffered its own catastrophic earthquake. The earthquake destroyed 600,000 structures and killed 9,000 people. The tremors were felt as far as Tibet. In an effort to curb destruction in such an earthquake-prone country, the Institute for Social and Environment Transition (ISET) has been researching the benefits of straw bale construction, such as the material’s flexibility and cost-effectiveness. In 2018, Builders Without Borders and the Kevin Rohan Memorial Eco Foundation collaborated to build the first straw bale home in Nepal. They continue to raise funds to acquire straw and balers.

Structures built of straw bales will be essential in minimizing destruction in areas of the globe most vulnerable to earthquakes. This material will bend rather than break during an earthquake. It also allows for a greater possibility of escape in the event of collapse compared to other available alternatives such as concrete and steel. In areas that are already struggling under the burden of poverty, the affordability of straw bales is a major appeal. Thanks to the work of organizations like Builders Without Borders and PAKSBAB, people will continue to save lives and house families thanks to this ancient practice.