Tag Archive for: Bread For The World Institute 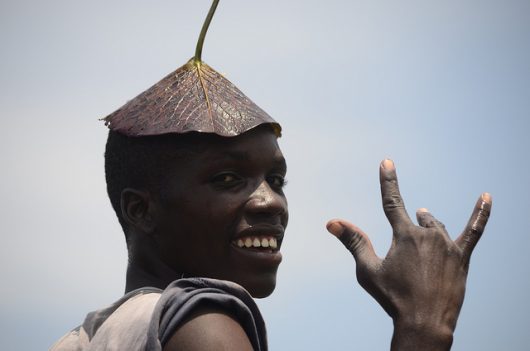 Activists often participate in endless debates about what they think will be the key to unlocking a world without hungry children and families. There are numerous charities that work to stop world hunger, and many of them are making real, sustainable impact in countries all over the world. One way to take a step towards a world with healthy, well-fed families is to spread awareness of these foundations. By spreading awareness, there is a higher chance these charities will get the funding they need to continue to meet their goals.

With more than 6,500 staff workers all over the globe, Action Against Hunger’s programs have been able to reach more than 13.6 million people as of 2014. Its programs not only save lives but also teaches impoverished people how to live safely long-term. With more than 35 years of experience in food crises and disaster, this foundation knows how to keep children healthy and understands where and when to expect malnutrition.

Regarding nutrition and health, Action Against Hunger has treated 5 million people around the world. This includes almost 3 million people from Nigeria, over 104,000 people in the Democratic Republic of Congo and over 93,000 people in South Sudan. They are able to impact millions of hungry people by evaluating nutritional needs, treating acute malnutrition, preventing acute malnutrition and building local capacity. This is done by collecting data on nutritional indicators like geography, infrastructure, local capacities, resources and cultural practices.

2. Bread for the World Institute

The Bread for the World Institute is a voice that urges national leaders throughout the world to end hunger in their own countries and others around the globe. The foundation has been able to help the hunger epidemic in the United States, Asia, Latin America and Africa. The institute works with members of Congress on issues that affect world hunger including immigration reform, incarceration and child nutrition. Basically, Bread for the World Institute wants the goal of eliminating world hunger to be a priority and believes that by doing so, world hunger can be eliminated by 2030.

Through their Vote to End Hunger campaign, Bread for the World Institute encourages voters to make world hunger one of their top priorities during the 2016 election campaigns and in the ballot box. Their goal is to elect a leader who will make ending world hunger a priority in congress.

Freedom from Hunger provides families the resources necessary to build a healthy future. By equipping families with the proper resources, they can live sufficiently on their own and build healthy lives without continuous aid. Freedom from Hunger believes in educating and empowering communities to fight world hunger. Education modules are influenced by the needs of chronically hungry women, a demographic deemed a priority during the research phase. Group activities, training sessions, guidance counselors and interactive discussions are implemented to inform and encourage the women in safe health practices, like HIV/AIDS prevention or breastfeeding practices and hygiene.

The Hunger Project believes there are three essential pillars their foundation must follow in order to make an impact on impoverished communities: empowering women as key change agents, mobilizing entire communities into self-reliant action and fostering effective governments to engage local government.

Heifer International works with various impoverished communities to help boost their economies. Their approach focuses on developing income and assets, food security and nutrition, and the environment. They then work on empowering women and social capital in order to multiple the success of their efforts. The foundation has seen much success in bringing sustainable agriculture and commerce to families without food.

Heifer International supports the “passing on the gift” model. By giving a family a goat, a cow or even a water buffalo, a family can build a sustainable life. Cows produce milk, fertilizer for crops or the capacity to plow fields. When these animals create offspring, families are encouraged to pass on the first female baby to another family. This family then does the same with the offspring of their animals.

It is important to raise awareness and donate to these foundations, seeing that they have been making real-time change and investments. Like these vastly different organizations, ending world hunger does not take a single fix-all approach. Different strategies, supported by generous gifts, provide hungry people with the tools and willpower they need to stop world hunger. 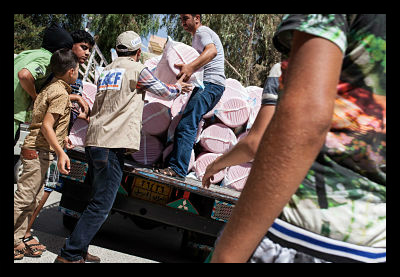 The United Nations Food and Agriculture Organization has estimated that around 870 million people of the 7.1 billion people in the world –  that is, one in eight – were suffering from undernourishment between 2010 and 2012. Almost all the hungry people, 852 million to be exact, live in developing countries.

There are 16 million people undernourished in developed countries. Thankfully the number of undernourished people has decreased almost 30 percent in Asia and the Pacific, from 739 million to 563 million.

The decline in hungry people could be accredited to charities that make it their mission to end world hunger. One charity helping alleviate hunger for example treated 42,000 severely malnourished children in Democratic Republic of Congo in 2012. This charity is called Action Against Hunger.

Action Against Hunger has 30 years of expertise in specific areas like conflict, natural disaster and chronic food insecurity. It runs life-saving programs in over 40 countries benefiting seven million people each year.

In America, the number one charity to donate to for hunger is Feeding America. Formerly known as America’s Second Harvest, it provides food assistance to more than 25 million low-income people facing hunger in the United States, including more than nine million children and almost three million seniors. Feeding America services all 50 states with more than 200 food banks.

While considering which charity to donate to, a third charity to consider is the Bread for the World Institute. The Institute is a lot like The Borgen Project in that it aims to educate its advocacy network, opinion leaders, policy makers and the public about hunger in the United States and abroad. One of the primary goals of the Institute is to end hunger in the United States by 2030.

Thanks to donations and hardworking volunteers, world hunger has been cut in half; however, hunger still kills more people every year than AIDS, malaria and tuberculosis combined. For example, Asia currently has the most people on its continent that are hungry, making up about two thirds of the area. In order to stay on track and end hunger by 2030, donations are imperative and any of the charities listed above are rapidly working to make sure the money donated is used in the most efficient way. 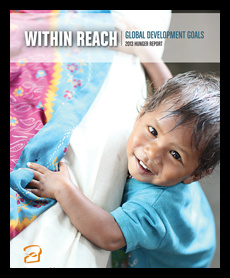 Finding up-to-date information on research concerning hunger, poverty, and agriculture can be a difficult task.  To make this easier, the Bread for the World Institute compiles all their research into easy-to-understand formats. Bread for the World Institute is the research arm of Bread for the World. The institute focuses on research in several key areas including U.S. hunger and poverty, trade and agriculture, the Millennium Development Goals, maternal and child nutrition, immigration, global hunger and poverty, foreign assistance to reduce poverty, and climate change and hunger.  The staff work on policy analysis focused on hunger and strategies to end it. They use their research to educate world leaders, policymakers, and the public about hunger in the United States and abroad.

Within each research area, working papers can be found highlighting current research and findings happening. In addition, the institute is committed to the idea that development assistance does indeed work. They have a section of seven short essays telling stories and providing facts relating to the results of effective development aid. The essays are available for use by anyone from activists to politicians to Sunday school teachers. The essays serve to help individuals get a better picture of the fight against global hunger and extreme poverty.

The Bread for the World Institute also has a blog that provides current updates on what is going on within the fight to end world hunger and extreme poverty. The blog breaks down some of the information into a more comprehensible format. The goal of the institute and the research is to help people become informed and take action in the fight.

The 2013 Hunger Report is also produced by the Bread for the World Institute. The Hunger Report looks at issues surrounding global hunger such as malnutrition and food insecurity. The 2013 edition calls for a final push towards meeting the Millennium Development Goals.  Overall, the Bread for the World Institute is an excellent resource for information and facts on global hunger and on the fight to end it.