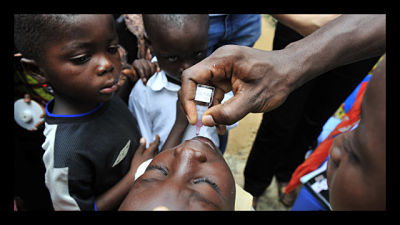 Sometimes all it takes motivate someone to make a difference is a magazine article. For Brad Gautney, founder of the nonprofit Global Health Innovations, a National Geographic article on poverty in Haiti he read during his senior year of college changed his life aspirations and lead him to dedicate many years following to providing health services to Haiti as well as Kenya, Malawi, Ghana, and Liberia.

It all started when Gautney interned at a pediatric HIV ward in Haiti. He found the work so rewarding, and the need so great, that he spent the next 10 years returning to Haiti to donate his services. He even brought his family to live there for four years to run a clinic, school and nutrition program. Eventually Gautney’s work expanded to other African countries in need, making Global Health Innovations what it is today.

Now, the organization has 6 board of directors and is making more of an impact than ever. Global Health Innovations’ biggest feat so far is what it dubs the “HITSystem” which gives aid to pregnant HIV positive mothers to ensure that they can do everything in their power to prevent passing on the disease to their child, and providing treatment if a child is infected. The system is designed to combat poor treatment systems like in Kenya, where women are all too often discouraged from bringing their children back to the hospital for testing and treatment due to poor communication.

The organization also works to distribute mosquito nets to prevent malaria, one of the leading causes of death in all of the countries the organization works in. They have handed out more than 7,000 nets in Malawi as part of their “Under the Net” campaign. According to a video posted on the organizations website, providing nets to the entire population would reduce the spread of malaria by 90%.

In addition, they have provided disaster relief in Port-au-Prince Haiti after the January 2010 earthquake. Gautney went back to the clinic where he originally began working, and set his team up to provide medical services within 36 hours of the disaster.

Gautney’s faith plays a big part in his work. He says on the organization’s website that he has seen “lives transformed by the healing power of God’s love, and in the process, [his] life was transformed by God’s love as well.”