India is a vast South Asian country, not only with diverse terrain stretching from the Himalayas to the Indian Ocean Coastline but also with significant socio-economic contrasts. It is understandable how the media misrepresents India because it tends to shed light only on the rural and urban poor and the struggling.

With a population of more than 1.3 billion, there are stories of unfortunate and inhuman events that occur in the country but those events don’t represent India, as a whole. India needs to be looked at through fresh lenses to dispel the following ideas.

These are just a few examples of how the media misrepresents India. Hopefully, in the coming years, the media will shed more light on the brighter side of the country.

Bollywood, the large Hindi-language film industry based out of Mumbai, India,  is speaking out against rape and the abuse of women. Seeking to spread awareness about these issues within and without the industry, the campaign’s targeted audience is all people throughout the country. The initiative is led by a top radio station, with actor John Abraham as its ambassador. The entire movement utilizes the slogan, “Now the nonsense ends, change begins.”

The focus is on women’s safety at work, at home and in public spaces, which builds on previous campaigns emphasizing the need to change sexist language and to stop acid attacks against women. Bollywood is attempting to draw pressing issues within Indian society into the spotlight.

On the radio, celebrities like Abraham have begun to use their influential positions to voice their backing for the anti-rape movement. This comes as a pivotal change because in the past, stars normally avoided speaking on any pressing social issues.

The public outcry and protests after the 2012 gang rape and death of a young woman in Delhi are in large part responsible for the change in attitude. While a number of celebrities were advocates for social change before, the shocking Delhi incident resulted in a dramatic increase in the number of movie stars and individuals in the general public taking a stand against rape culture.

Celebrities’ participation in the anti-rape effort helps maintain the pressure to change both social and political views on rape. In India, like in many countries, rape is a critical problem. The number of reported cases increased by 902 percent from 1971 to 2012. Due to social stigma and shame, many cases still go unreported.

Although the backbone of India’s anti-rape movement remains predominantly with the public and the media, Bollywood stars’ involvement is helping to strengthen and sustain it. For example, actor and director Farhan Akhtar is using many different media outlets to lead the MARD, Men Against Rape and Discrimination, which seeks to redefine the perception of masculinity.

Others are making movies that directly address the issue of gang rape, such as producer Siddhartha Jain’s film “Kill The Rapist?” Scheduled to premiere in October 2014, the movie allows audiences to participate in deciding what should happen to the rapist in the story. The overarching message of the film aims to deter potential rapists and engage the public about the need to report rapes.

And all of these efforts appear to be bringing change. In the capital alone, the number of reported rape cases increased dramatically from 433 in 2012 to 1,036 in 2013.

The film industry, though, has often reaffirmed misogynist culture on screen by objectifying women and even, at times, condoning sexual harassment in their movies. Despite the fact that not all of Bollywood has completely shed its sexist and male-dominated ways, the stance many stars are taking demonstrates that both the industry and all of India can change their attitudes about women.

Although completely redefining public opinion about rape and the role of women in society will not occur overnight, the positive steps taken in the public, the media and in Bollywood have made the issue part of the mainstream dialogue. With continued efforts to raise awareness and encourage conversation, the people of India seek to better protect and value the rights of women. 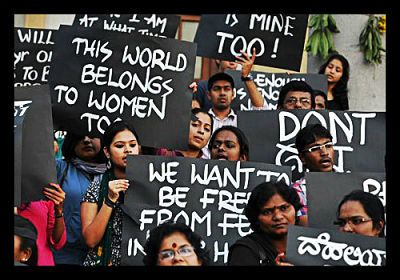