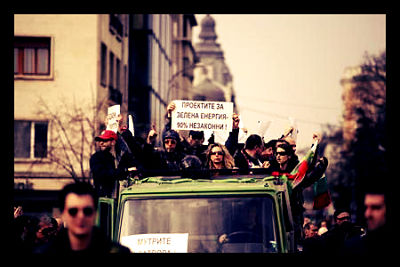 2013 has been a tough year for Bulgaria. In an environment of political corruption, declining wages, and rising energy prices, the 7.3 million citizens of this Southern European nation has suffered. Bulgarians have been taking it to the streets since January in protest against the government.

Former president Boiko Borisov resigned in March in response to the protests and was succeeded by provisional prime minister Marin Raykov, who has promised to raise income levels. The movement is strongest in Sofia, the capital, where the President’s Office and other federal buildings are concentrated in an architectural complex known as the Largo.

On March 13 of this year, 53-year-old Sofia native Dimitar Dimitrov planted himself in front of the Largo, doused himself in gasoline, and lit himself on fire. Dimitrov’s act is one of seven self-immolations that have been carried out by disenchanted Bulgarians since the beginning of the year.

Like his counterparts, Dimitrov was unemployed and struggling to obtain food. The self-immolations committed by people like Dmitrov and the political activist/photographer Plamen Goranov have garnered the attention of the international community to the issue of poverty in Bulgaria. As the crisis continues,  the new leadership of Bulgaria will have to listen and respond to the needs of the people to prevent more lives from being lost.