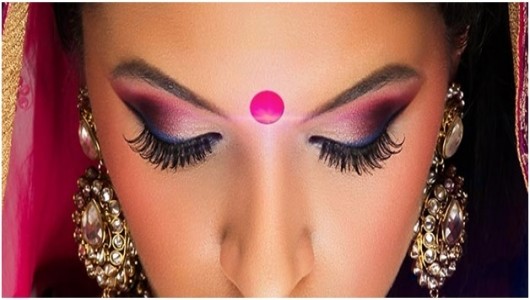 Women in India have been sporting small dots between their eyebrows since the third or fourth century. The mark is called a bindi and is a Hindu tradition.

Historically, it has been worn for religious purposes or to show that a woman is married. Today, women of all ages wear the bindi just as a beauty mark.

A nonprofit organization based in Nashik, India has come up with a new reason to wear the bindi. The Neelvasant Medical Foundation and Research Center, in partnership with Grey Group Singapore, a company that makes advertisements, wants the bindi to become a source of iodine.

The two organizations initiated the Life Saving Dot program that coats bindis with a full daily recommended dose of iodine. Dr Prachi Pawar is the leader of the project. He explains that the skin can absorb the essential micronutrient, but the nonprofit is still studying just how efficient the dots are.

“It would have been more satisfying—and convincing—if [the organizers] had done a bit of work beforehand to show that it actually delivers iodine,” says Michael Zimmerman. He is a nutrition researcher for the Swiss Federal Institute of Technology in Zurich.

Roland Kupka is a micronutrient senior adviser for UNICEF. He points out that no one knows for sure if the iodine stays on the bindi. There is a chance that it might evaporate off when women spend time in the sun.

India is one of 54 countries struggling with iodine sufficiency. The soil there lacks iodine and, therefore, so do the crops. Iodized salt is unavailable to a third of all families in the country. According to UNICEF, 66 percent of families worldwide have access.

Iodine is necessary for the manufacture of thyroid hormones. For pregnant women, it is crucial for the development of the fetus’ brain. Iodine deficiency is the greatest cause of preventable but irreversible brain damage in the world. It also causes depression and weight gain in adults. Children can suffer from mental health issues like retardation and even death.

So far, more than 30,000 women in about 100 villages throughout India have been given the special iodine bindis. The organizations are starting to plan a system to produce and distribute them on a large scale.

If the Life Saving bindis are successful at administering iodine, they will be an affordable nutritional supplement: 10 repees, about 16 cents, for a package of 30 bindis.

The Neevlasant Medical Foundation and Research Center is a nongovernmental organization that strives to support rural and tribal parts of India and other developing countries. Started in August of 2005, they have specific programs for health, environment conservation, finance, child/women development, mental health and water conversation.