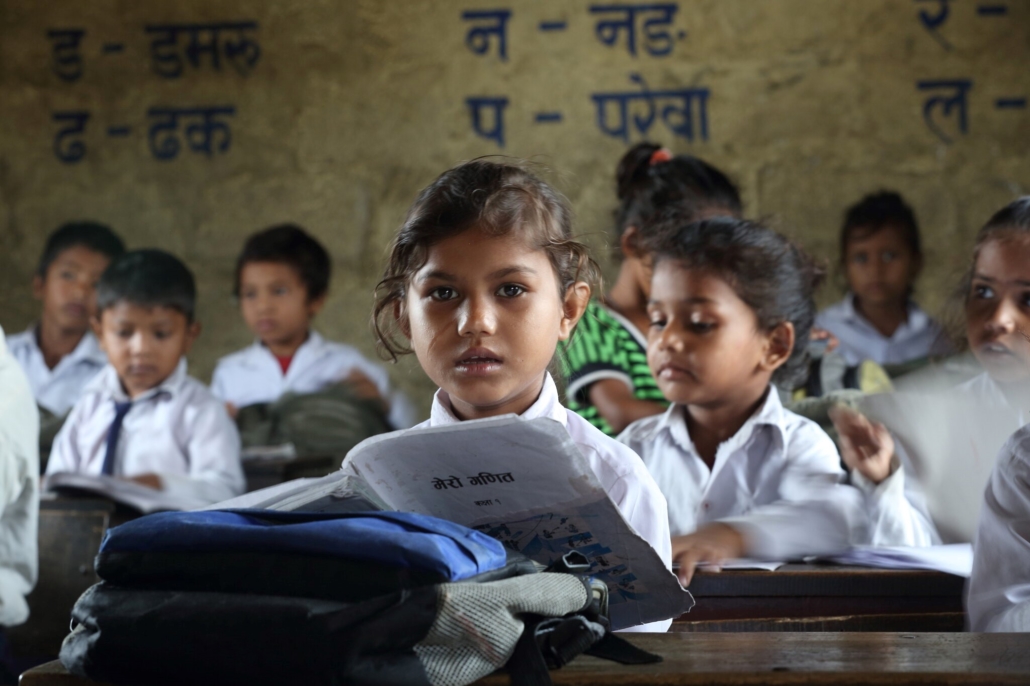 Bibhuti Aryal’s great grandmother was a child bride who eventually became a mother and a widowed teenager. She did not get the opportunity to receive an education, but she instilled the importance of education as a way to escape poverty for her family. Aryal’s grandfather went on to become a respected educator in their home village, starting the family’s involvement in education in the community. It was traveling back to his home nation of Nepal that caused him to come up with the idea of the Rukmini Foundation. Despite recent progress in terms of equal access to education, many children, especially girls, are “doomed to become workers, wives and mothers” when still children. The Rukmini Foundation empowers Nepalese girls to have the opportunity to graduate high school. Aryal started the Foundation with the help of his family in 2011.

“It is because of girls education that her sons are able to benefit,” Aryal says as he shares that his mother was the first girl from her village to go to school which led to an opportunity to study at the University of Pittsburgh in the United States.

The Situation in Nepal

Despite attempts to tackle the rampant poverty from various sectors, Nepal remains one of the poorest countries in the world. Nepal ranks 145 out of 187 countries in terms of human development. Poverty in the landlocked nation impacts both the rural and urban populations with harsher effects in the rural areas. Ninety percent of the total poor live in rural areas. Land fragmentation, high population growth, low economic growth, increasing unemployment and underemployment and income inequality contribute to the poverty phenomenon in the country.

In the majority of the well-populated rural areas, there is little access to education, health care, sanitation and clean drinking water. Some of these families must make decisions influenced by their economic situations, such as whether to send their child into the workforce rather than receive an education.

While growth in privatized education widened the education gap between the rich and the poor, public education is free for the Nepalese population. However, when families struggle to afford the basics such as food and uniforms, even free education can become expensive. Along with social inequalities, Nepal plays host to gender inequalities as the society much prefers boys over girls. People often view the male gender more as an investment because more opportunities to earn money are available to them, which helps support their families. In contrast, there are fewer opportunities for females. Aryal and the Rukmini Foundation are working to educate parents about the assumption that boys are more valuable in order to present girls with the opportunity to support their families as well.

The Rukmini Foundation and the Power of Education

A girl’s education not only impacts her life but the lives of her family, community and nation as well. When poverty impacts girls, it has a negative effect on future generations. The Rukmini Foundation empowers Nepalese girls because it believes all children have a right to education and the nonprofit organization focuses on girls because poverty affects girls and women more severely than boys.

“The vicious cycle of poverty can only be counteracted through education and the empowerment of girls and women to have a voice,” Aryal mentioned.

The Rukmini Foundation aims to “empower girls through quality education so that we can eradicate child marriage, end gender inequality, and enable a more equitable and prosperous Nepal.”

The Gyan Program works with students in the Pharping area in southern Nepal to pioneer education regardless of social or economic standing to increase awareness and access to quality education. Gyan is the Sanskrit word for knowledge. The program also improves access to technology and STEM-related fields. To combat the vulnerability of young girls in rural populations, the Rukmini Foundation empowers Nepalese girls by providing support through graduation to girls whose family cannot financially support educational costs.

With support from the Manmohan Memorial Community Hospital, the Aayush Program provides routine check-ups and health education along with health awareness programs to ensure the girls and their families remain healthy. Aayush is a Sanskrit word that means health.

The Didi Program is the final component of the Rukmini Foundation’s holistic approach. To ensure positive self-esteem, the Didi Program provides mentoring from elder girls who volunteer to guide the girls through education and life’s challenges to build self-worth and confidence. The mentors act as positive role models and inspiration through the girls’ educational pursuits. Didi is the Nepali word for elder sister.

The Successes of The Rukmini Foundation

The Rukmini Foundation implemented a Moms Club program through a partnership with Global GLOW and LitWorld, both U.S.-based organizations. This program allows the foundation to work directly with women who may have married early and had little opportunity to receive an education. It gives them a piece of their childhood back that was taken from them, Aryal says. They can now advocate for issues affecting women and girls and can share their skills.

Over the last eight years, the Rukmini Foundation has witnessed encouraging results. Aryal mentions that all 10 of the girls who began the program graduated from high school which enabled the nonprofit organization to impact the lives of many others. In the past year, 11 more girls graduated from high school with some achieving high scores on national standardized exams. The organization was also were able to intervene in two cases of potential child marriage which allowed the girls to continue their education and later graduate high school, rather than marrying.

Some of the graduates have found work as department store managers and nurses, Aryal says. This shows they not only have a diploma but real-life skills and a means to earn a living.

In the immediate future, the nonprofit hopes to focus on malnutrition because they “believe it is impossible to fill a child’s mind if their bellies are empty.” The nonprofit also hopes to reach villages that struggle the most economically and others that are recovering from the 2015 earthquake in Nepal.

In the long-term future, the Rukmini Foundation hopes to develop a “pipeline of leadership,” so graduates have economic opportunities within their own communities to increase the prosperity. A simple proverb says it all: “when you teach a boy, you teach a man, but when you teach a girl, you teach a village.”