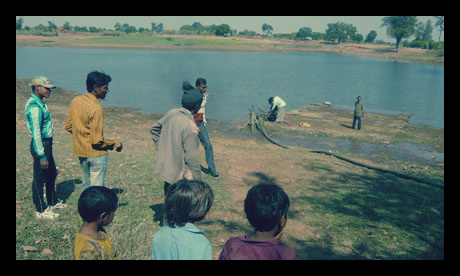 The villages around Dungarpur in India’s northwestern state of Rajasthan have a natural beauty that is characteristic of many rural hillside towns. There are rolling wheat fields, eucalyptus trees and luscious neem trees that contrast the colors of the red-tiled houses. However, this area is not without its natural problems as well. The region suffers from a chronic lack of water and faces the common problem of drought in India. Between rainy seasons, the men of the village often have to leave their farms to pick up work in surrounding cities.

This year, half the men are staying closer to home. The village is structured around a pond that provides water to surrounding farms. Normally, the pond dries up by this time of the year, but thanks to the Evangelical Fellowship of India Commission on Relief (EFICOR), the lake has enough water to last until the next rains come months from now. The pond has suddenly turned into a lake after tractors deepened it by 15 feet last May to drastically increase the size of the reservoir. Now, the lake is not only filled in a time of year when it used to be dried up, but there is enough water to irrigate fields that are farther away, allowing the villagers to plant second crops. This drought in India is benefiting the villagers.

EFICOR’s work in the region has not come easily. The organization has been in this area of India since 2008 trying to gain the trust of the locals and figure out how best to serve them. The villagers in the area are marginalized Bhil people that are distrustful of and unconnected to state government. EFICOR worked with them to make use of the government aid programs that they are eligible for. One of the most important breakthroughs for the villagers was forming community committees. The formerly disconnected families came together under these new committees to decide which ponds to deepen and which families needed the most urgent attention. The committees even tested the power of the village chief that formerly based these types of decisions on favoritism.

In addition to their community committees, EFICOR has set up savings groups for women in the villages. One group saved enough money to consider buying a small grinding mill. The goal of the project is to build confidence among the marginalized communities and show them that they are entitled to just as many government services as any other citizens. The plan seems to be working, but it will be a long time before we can tell if the newfound solidarity among the villagers will last.