Tag Archive for: Benefits of Industrialization The Current Economy of the Ivory Coast

Rising prices of cocoa in 2018 and increased crop production marked a positive turn for the Ivory Coast since at least two-thirds of its population works in the agricultural industry. The Ivory Coast is the world’s biggest producer of cocoa. Although the amount of cocoa in the market surprised even analysts, the Ivory Coast must still transition from agriculture into manufacturing and service industries. This follows the same pattern of evolution that the U.S. and Japan took as they were industrialized. The transitional period will be long and gradual as industrialization is a major change to an economy.

To sustain one of Africa’s fastest-growing economies, the government is investing more than $7 billion in infrastructure between 2018 and 2023. Most of the investment was directed to the capital and major port city Abidjan. “We want to be an emerging country but to achieve that, we will need high-quality infrastructure to support the economy,” states Amede Koffi Kouakou, Minister of Economic Infrastructure. Kouakou explains work must be done to fix the roads damaged by floods. A train network and bridges to Abidjan are other investments currently underway. The roads are in poor condition. However, an infrastructure boom is a sign that the country is prepared to become an emerging economy.

The Benefits of Industrialization

Japan presents an industrialization success story. From the 1880s to 1970, Japan grew rapidly and became a powerful economic leader by the 1980s. Japan is now highly developed and is the third-largest economy in terms of nominal GDP, just behind the European Union and the United States. The process of becoming one of the most powerful economies took enormous effort and focused on infrastructures, such as building roads, schools and hospitals. Japan decreased its poverty rate from an unusually high number, the exact figure is unknown, to 16 percent as of 2013. In comparison, the U.S. has a poverty rate of about 15 percent. Ultimately, the progress Japan made originated with industrialization.

Job creation would be a major benefit of the industrialization of the Ivory Coast. Poor farmers flock to jobs and receive training. In turn, they become a valuable asset to companies and the particular industry. Another benefit is the advancement in farming equipment and machinery. These advancements will increase productivity and improve the quality of crops. This results in a more automated agricultural industry where machines do the arduous work and leave extra income to buy products and services.

“In developed countries, economic growth is driven by industrialization underpinned by strong manufacturing. We need to engage African leaders and policymakers to promote industrialization on the continent if we are to accelerate Africa’s transition into a middle-income continent,” states Joseph Mungarulire, director-general of the National Industrial Research and Development Agency in Rwanda. Mungarulire explains that Africa is mostly supported by agriculture, not industry, which leads to slow industrialization and high poverty.

A Pre-Requisite for Industrialization

Industrialization of the Ivory Coast must begin with a strong, stable government that welcomes private investment whether abroad or within its borders. Thankfully, China sees opportunity in investing in Africa. By 2018, China had invested more than $60 billion in Africa. Part of this investment is for building railroads, a simple but life-changing idea that brings jobs and people, just as it did in the U.S. from the 1830s to 1860s. The industrialization of the Ivory Coast, along with investments by the public and private sector, might be the solution to reduce poverty in the country. 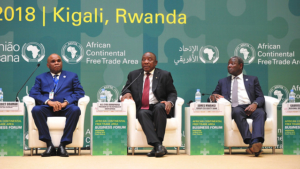