Tag Archive for: BBC One 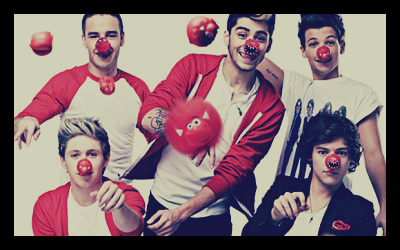 Friday, March 15, 2013 was best spent celebrating Red Nose Day by sitting in front of the television watching Comic Relief – Funny for Money on BBC One. The show was full of comical sketches, musical performances, and celebrity appearances all to help raise money for Comic Relief, an organization working to make the world poverty free. It definitely resulted in a great deal of laughter, which is the point of Red Nose Day, which promotes “having fun and changing lives” as one of its main goals.

Red Nose Day is a day for everyone “to put on their Noses, pull out all the stops, and get fundraising,” according to the official website. Literally, everyone puts on red noses and clowns around, eliciting laughter and donations. Celebrity support of the day came from an array of celebrities – from Rihanna, who donned a Stella McCartney red nose t-shirt, to Ron Burgundy of Anchorman, who performed in one of the comical sketches. And, of course, One Direction, a big supporter of the Comic Relief organization, made an appearance, performing their hit song, and the official Red Nose Day single, One Way or Another (Teenage Kicks). Yet, one celebrity stood above the rest, Jessie J, a panelist for the show The Voice. On live television, Jessie J sacrificed her lustrous black bob in order to boost the amount of money raised, all of which is going to Comic Relief. After shaving her head she said, “It is the weirdest feeling” to have no hair!

The money raised for Comic Relief is going to help support a variety of people and projects in both the United Kingdom and Africa. In the United Kingdom, it will, amongst many other things, help provide shelter to young adults living on the streets and help protect those who have suffered from domestic abuse. In Africa, it will help by providing life-saving treatment for malaria to communities by giving them access to clean and fresh water and much needed vaccines.

Red Nose Day was celebrated throughout the United Kingdom and Africa. As of 6:30pm on Friday night, it had raised over £75 million, setting a new record for the most money raised in the 25 years since its creation. The total amount raised, however, has not yet been released.

If you missed the “the star-studded and unmissable Comic Relief- Funny for Money” show on Friday, don’t worry! You can get exclusive clips on iTunes, with all purchases going to support Red Nose Day.