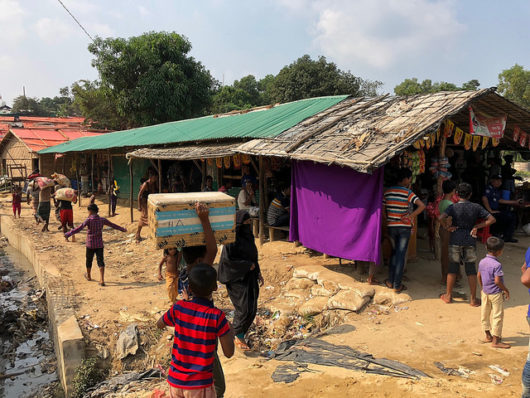 At the start of 2017, the refugees of Rohingya fled in the thousands from Myanmar. Today, many of their lives are still in disarray as they search for family, look for new homes and deal with the trauma from the violence that drove them out of their country.

Rohingya refugees often lack the information to take the next steps towards these goals. The use of media within camps has been vital to dealing with the emergency and keeping refugees connected with each other and the outside world, so Rohingya refugee media has been given a new voice: Radio NAF.

Radio NAF: A Voice for the Voiceless

In times of crisis like this one, access to information is almost as vital as food, shelter, and water. Local media can and has been used as a platform to update refugees on the status of their hometowns, educate them on sanitary practices and guide them toward necessary resources. Moreover, media has been used as a platform for refugees to voice their experiences and call the rest of the world to action.

Radio NAF is a community-based radio station in the Cox’s Bazar district of Bangladesh. The station serves the rural and underserved communities in the region, which also happens to be home to the largest Rohingya refugee settlement, Kutupalong. The station interviews refugees and discusses the issues that affect them.

Due to the poor radio reception in these areas, all of the shows are prerecorded and brought to the communities through seven “listener clubs.” While the population in the settlement has declined slightly, listenership and attendance have risen, indicating that this is an invaluable source of information for those that come to and remain at the settlement.

But, another reason for the influx in attendance could also be the station’s ability to provide a voice to the voiceless. The station’s interviews allow individuals and groups in the settlements to make statements and send messages that reach far beyond the Rohingya refugee community. Its programs also tackle important issues like violence against women, and it also provides entertainment of the children in among the refugee, who comprise more than half of the population.

The charity focuses its efforts on alleviating these specific problems, but it also shares all of its information with the United Nations, NGOs and governments working to mitigate the crisis. Through Rohingya refugee media, the people have the ability to make their voices thoroughly heard and get the message out to these organizations for swift and proper actions.

BBC backed Radio Naf has uncovered sanitary, financial, linguistic and logistic issues that continue to persist in the Rohingya refugee camps while sharing crucial necessities and calls to action to key players in the relief, which has been the focus of Radio Naf and its interviews. But, in order to bring about progress, this hope must be met with an eagerness to hear their voices and act on those issues.

Rohingya refugee media is an essential component to connecting refugees and working to alleviate some of the pain and misfortune that they have lived through. It has developed a platform for the spread of hope. This hope, after even a year into the crisis, echoes from community to community, from settlement to settlement.