Tag Archive for: Back to School Campaign 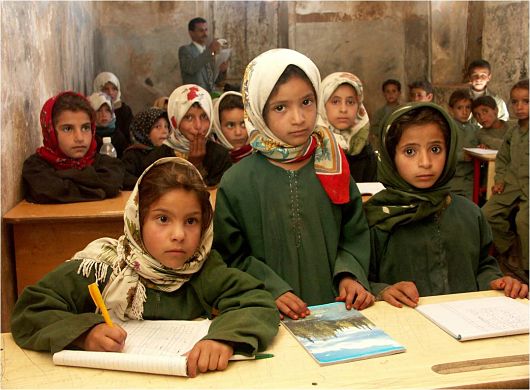 Yemen, the poorest country in the Middle East, has experienced numerous violent conflicts over the past few decades. This is mainly due to an inequality in access to power and resources. Corruption is commonplace in Yemen’s relatively weak government, and conflicts are only exacerbated by poor infrastructure, high unemployment, food insecurity and limited social services. Currently, competing groups are fighting for control of the government, resulting in a scenario akin to a civil war. Those loyal to President Abdrabbuh Mansour Hadi, who was forced to flee the capital in February, have come up against a group of Zaidi Shia rebels called Houthis. Regional tensions and instability have increased.

Before the current conflict, many children were already out of school, and few completed secondary education. Primary enrollment stood at 73.8 percent, with a 60.4 percent completion rate. There was a large gender gap, with 85.2 percent of boys enrolled and only 62 percent of girls. Secondary enrollment was much lower, with only 33.5 percent attending. The gender gap persisted, with 43.6 percent of boys attending and 20.7 percent of girls. Literacy rates were also low: 65 percent of the population over the age of 15 could read and write.

The conflict has had a large negative impact on the education system in Yemen. 1.8 million children are out of school. 3,600 schools have been directly affected: 248 of these schools have been damaged, 270 have been repurposed for housing internally displaced citizens and 68 have been occupied by armed groups.

Because schooling has been interrupted for many students, UNICEF has been holding catch-up classes for over 200,000 students who have been unable to go to school for over two months due to conflict. These classes are intended to prepare students in grades 9 and 12 for their national mid-August exams, which they must pass to earn a basic or secondary school certificate. Yemen’s Ministry of Education has played an important role in mobilizing teachers and designating temporary learning spaces in areas where schools were destroyed. UNICEF has also been providing free resources such as notebooks and pencils.

Yemen’s school year is set to begin on September 5, but this could change depending on the security situation. UNICEF is currently trying to raise $11 million to help struggling students and fix schools that have been damaged by conflict. This money will go to rebuilding schools, supplying more teaching and learning resources, training teachers and community workers and running a back-to-school campaign. Education is crucial for Yemeni children to help themselves, their families, their communities and their country in the face of conflict.