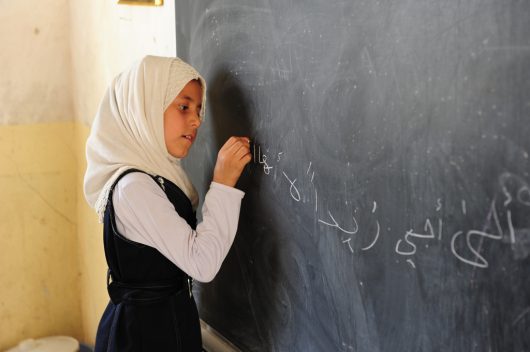 Since the Islamic State group (IS) emerged in Iraq several years ago, the lives of thousands of civilians have been negatively affected by violence and extremism. When forces swept through the country in 2014, their largest conquest was the city of Mosul.

The invasion forced a large portion of the population to flee and the city became the group’s best claim to legitimacy as an Islamic caliphate. Realizing the significance of the city, taking back Mosul is now a major priority for both Iraqi and Western forces in the fight against IS.

In the two years that Mosul and its surrounding areas have been under the control of IS, thousands have been forced from their home and hundreds of Iraqi children have been denied access to education. Now, as forces advance on the IS stronghold in Mosul, Iraqi children are finally returning to school in liberated villages that neighbor the city.

Mosul is an ancient city with hundreds of years of culture and history, making it central to Iraqi identity. The city is diverse and made up of Sunnis, Shiites, Christians and Yazidis. Not only has the city’s historical and cultural significance been damaged by the presence of IS militants, but the lives of hundreds have been disrupted.

Eastern Mosul and its surrounding cities have been liberated by Iraqi forces and residents of the area are overjoyed to feel they have regained some sense of control in their lives and communities. Free from the grip of IS, people are free to use their cell phones, men are free to shave their beards, families aren’t consumed with the prospects of being separated from one another and children are free to return to school.

After IS invaded Awsaja, a town about 30 miles from Mosul, parents pulled their children out of school to protect them from the extremist ideologies that the curriculum turned to under militant control. Awsaja was reclaimed by Iraqi forces about two months ago and since, all 700 children in Awsaja have been re-enrolled in school. The small town is severely lacking in educational infrastructure and teaching faculty, but goals for the future of Awsaja revolve around building a successful educational program for all children.

Today, half of the world’s 65 million displaced people are under the age of 18, and only 36 percent of these youths have access to education. Without education, children are more likely to be denied economic and social opportunities which can stunt the development of a community as a whole. Considering these numbers and their implications, Awsaja’s fight to provide quality education for its children is a huge step in standing up to IS and the extremism it represents.

As Iraqi forces move closer and closer to taking back Mosul, more and more Iraqi children return to school.