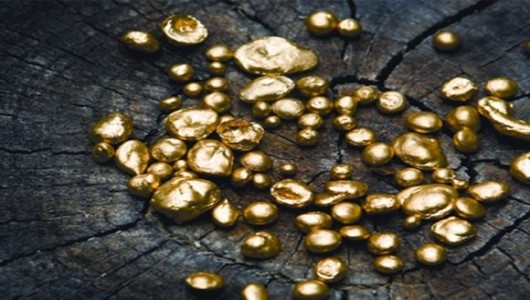 Artisanal gold mining is the process of extracting metals from the earth by independent miners, who utilize the mined metal for small-scale independent projects. These miners, or artisans, work independently of mining companies, and are very often non-compliant with regulations pertaining to mining and metallurgy.

Artisanal mining of gold is a significant source of income in low-income countries with noteworthy deposits of gold, such as Colombia and Peru. Mining companies hold the monopoly over most of the gold ore in the areas, and the miners employed by their contractors are not particularly well-paid. Artisanal mining allows for the miner to extract as well as finish the gold product, which gives a higher monetary return than the wage labor in the mines.

Notwithstanding the somewhat uncertain nature of artisanal mining, it employs an estimated 30 million people worldwide, mostly in the developing countries. Some people adopt this practice seasonally as an alternate to farming; in other instances, gold mining is their sole source of livelihood.

Despite the financial incentive of independent mining, the challenges associated with it are substantial as well. The most immediate one of these challenges is the issue of extracting the gold metal from its mined ore. To ensure a decent yield, an effective metallurgy process needs to be used. In absence of industrial purification, the next best alternative is usually the use of mercury extractions.

Mercury extraction of gold was once a popular technique for the metallurgical removal of gold from its ore. It has largely been replaced with other methods now due to its potential for health and environmental hazards. In developing countries, this process is still popular for artisanal mining. The method involves amalgamating gold ore with mercury metal. The gold metal is melted into the mercury, while the impurities are separated. The gold-mercury amalgam is then heated to a high temperature, where the mercury evaporates, and pure gold is left behind.

The method, although effective, uses the highly toxic mercury metal. The evaporation process yields the highly dangerous mercury vapor. The improper handling of mercury in artisanal mining is a major issue for the environment, as well as the health of the miners. Mercury can be inhaled in airborne droplets from the extraction process. The inhalation can cause potentially fatal damage to the lungs, as well as kidney failure, seizures and permanent brain damage. Mercury poisoning in pregnant women can cause long-term cerebral damage to the fetus.

The implications of improper handling of mercury are vast; international regulations encourage the elimination or reduction of mercury usage in metal purification. Nevertheless, almost 400 metric tons of airborne, toxic mercury are produced from gold mining each year. The miners and people in close vicinity of these mines are the ones to face the harshest consequences of mercury pollution. The continued usage of mercury extraction is a manifestation of poverty of resources, both financial and educational, that hinders the safety of artisanal mining.

To eradicate this harmful practice, the World Bank has launched several programs that educate miners to utilize safer, cost-effective methods. These programs facilitate a better selling price and demand for products manufactured through these alternative methods. In a program initiated by the US State Department, 10,000 Peruvian miners were taught alternative metallurgy methods by 2013, and encouraged to sell the ores at a higher price than the amalgamated gold price. These methods successfully decreased the mercury production in the area by 50 percent.

The problem of mercury pollution and the health hazards it poses to artisanal miners in developing countries is one that has garnered much attention globally. Training the miners in better extraction techniques, as well as incentives to trade crude ore can eliminate the problems associated with mercury without damaging the livelihoods of the artisanal miners.