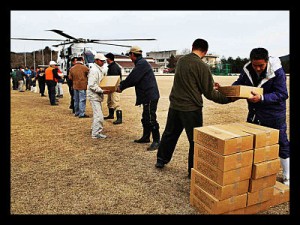 Dr. Arthur Keys, founder and CEO of International Relief and Development, has given out $3 billion in aid in his career. Because the places that need aid most are also often the most violent and conflicted, he has flown in personally to countries such as Afghanistan, Iraq, Somalia, Sudan and Pakistan to help ensure the money reaches the right people. Keys founded IRD in 1998 and it has grown to be one of the largest U.S. non-profit agencies. Before that, he worked for the United Church of Christ’s Board for Homeland Ministries in the United States. He believes his lifelong commitment to helping people through his religious organizations has sparked his dedication to international aid.

Keys got his start on an international level in Mumbai. He supported the poor of Mumbai in their conflict with outsider interests that attempted to turn their land into expensive commercial high rises. His group provided latrines and helped the citizens to retain their property rights. Now, the situation in Mumbai is much better. The outside interests, including the World Bank, have learned that they must work with local community groups rather than strictly local government to do what’s best for the region.

Currently, International Relief and Development specialize in helping communities around the world that are recovering from conflict or natural disasters. The 4.000 staff members, 90% of whom are hired locally, develop community stabilization, infrastructure, health, agriculture, democracy and governance, relief and logistics. Only a tenth of the donation dollars they receive goes to overhead and the rest supports impoverished communities directly. In Iraq, for example, his teams worked on renovating schools, sanitation systems and water systems as well as job training.

The main goal of International Relief and Development in any of the areas where it operates is stabilization, which means getting things back to normal. Members strive to achieve this goal by working with local community groups to ensure that the people’s best interests are prioritized. Despite the constant dangers of the job, IRD continues to take on projects in potentially risky areas. This follows the spirit of founder Arthur Keys and his commitment to helping the less fortunate around the world under any circumstances.