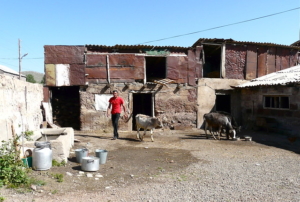 The Armenian Relief and Development Association (ARDA) focuses on one mission: to help impoverished Armenians. ARDA has helped Armenians in many aspects, including the building and restoration of medical clinics and schools. The organization has also created and provided resources for educational programs, widow and orphan programs and feeding programs.

However, its biggest project revolves around reducing homelessness in Armenia. Many apartment buildings were damaged during the 1988 earthquake, and there were not enough resources for rebuilding and restoration, which left thousands of Armenians without a home.

“According to the U.N. Economic Commission for Europe, of the approximately 800,000 families living in Armenia, about 40,000 are without permanent shelter.” Their solution was to use metal shipping containers as what was supposed to be a temporary shelter. However, this “temporary shelter” has been their home for over three decades. These “homes” are basically just protection against the elements, as they do not have a bathroom or a kitchen. Also, temperatures within the containers reach below the freezing point during the winter and are extremely hot during the summer. Thousands have died within the confines of these “homes.”

ARDA knew it had to find a solution to this on-going problem. The solution came in four phases and utilized a simple building material: polystyrene foam (more popularly known as Styrofoam).

In 2007, ARDA, together with the Armenian Center for International Development, sent faculty and students from Point Loma Nazarene University to northern Armenia to execute their four-phase plan.

The first phase involves the building of homes using inexpensive yet sturdy materials including polystyrene molds. The molds, which are hollow, “interconnect like Legos to make the exterior walls of the home.” Once the foundation is put into place, rebar for stability and wiring for electrical outlets are put into the molds, after which the cement is poured in. Each mold is 16 inches tall and eight inches wide. These molds result in much more energy-efficient homes, as they require 44 percent less energy for heating and 32 percent less for cooling.

After phase one is complete, the next step involves some research: trying to find a local manufacturer that can create these molds cheaply. “Each of the structures built during the trip cost an estimated $20,000. That doesn’t include labor, land, and extra materials, which were mostly donated.” Being able to acquire these materials at a reasonable rate is an important step in the continued building of these houses and reduction in homelessness in Armenia.

Once a manufacturer is procured, ARDA moves onto phase three, which results in more long-term benefits. This phase focuses on the creation of a business model that sustains production and creates jobs in the area. This is accomplished by building a Trade and Technology Center on the same site as the homes. Steve Lazarian, director of ARDA at the time said: “the center would provide education and training for the local community in various trades, including home construction.” These skills, which are essential to becoming self-sufficient, will assist Armenians in the transition out of temporary shelters and into permanent homes.

The success of the first three phases of the project will gauge whether the fourth phase is necessary. If they are successful, phase four will be the implementation of the project in other poverty-stricken countries worldwide.

Using this technique, a new home could be built in about one month. This is much shorter than the six to 12 months it takes when using traditional building methods. Also, the polystyrene blocks are mold and earthquake resistant. This is an important factor in a country that is still reeling from the aftermath of a devastating earthquake.

ARDA’s Angel Home Health program provides social services to fifty families. Of those fifty families, sixty-five percent graduate out of the program, acquiring the skills they need in order to take care of themselves.

Patrick Hovsepian, Operations Manager of ARDA, spoke of a woman named Eliza who approached ARDA for help after her husband passed away at a young age. She was left homeless and was unable to care for their baby. ARDA gave her a job as a Teacher’s Aide in their preschool. Through hard work and determination, Eliza eventually became the director of that same preschool.

What’s in Store for the Future?

Though the polystyrene blocks have proven to be an exemplary building component, ARDA is already looking for better materials, with hopes of building houses at an even faster rate. According to Hovsepian, ARDA is working toward securing an architect and building a 3-D printing factory in Armenia. With this new technology, houses can be built within one week, which will not only provide homes, reducing homelessness in Armenia, but it will also create thousands of jobs.

What do Potential Donors Need to Know?

When asked what people might not be aware of regarding the living conditions in Armenia, Hovsepian stated, “People don’t seem to understand just how impoverished these cities are. These people look just like us, but they’re living in devastating situations.” He also mentioned that many people think their small donations might not make a big difference. “A little bit here is a lot over there. It only costs $360 a year to sponsor a child, which helps pay for food, clothes, and education for an entire year.”

ARDA has been helping the poverty-stricken communities of Armenia for decades but its work is nowhere near completion. Armenians who have been living in containers that were not meant for habitation will soon be able to live in actual houses, complete with plumbing and heating, improving the situation of homelessness in Armenia. With ARDA’s help, there is hope that Armenians will emerge from poverty and become self-sustaining.