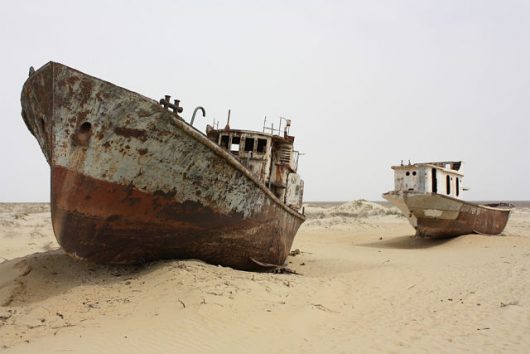 The Aral Sea was once a large saltwater lake located in Central Asia. With Kazakhstan in the north and Uzbekistan in the south, both countries bordered the body of water. Fishing communities in the countries prospered for years, yet a decisive change in the 1960s led to the demise of these towns. The two countries experienced drastically different outcomes, all due to developmental aid around the Aral Sea.

In the 1960s, the Soviet Union decided to redirect the water in the Aral Sea for agriculture, predominately for cotton. Previously, the sea was replenished by the water that rivers returned, making it a reliable source of income for neighboring fisheries. Over the past four decades, the sea has retreated about 93 miles, losing a surface area the size of Maryland. With salinity levels continuing to rise to more than seven times the normal amount, a once plentiful resource has run dry.

As the sea dried up, so did jobs. A reported 60,000 jobs disappeared in direct relation to Aral fishery shutdowns. Dust storms that swelled within the barren seabed contained various chemicals from the agriculture in the surrounding areas and caused irrevocable harm to citizens. Diseases related to poor air quality were rampant. Even the food produced in the area contained hazards for consumers, which forced thousands from their homes. Those that chose not to leave, despite the water and air pollution, were left living in poverty.

Intervention in Kazakhstan Improves the Lives and Livelihoods of Residents

In 2005, the World Bank intervened with a plan for developmental aid around the Aral Sea and partnered with the Kazakh government to install a dam. The plan cost $86 million and was designed to improve irrigation along the rivers and restore the sea. The dam primarily prevented water in the northern regions from flowing south. Additional measures to improve irrigation along the Syr Darya River made sure enough water flowed back into the North Aral Sea. Previously, as much as 40 percent of water was lost due to poor irrigation.

In 2006, the Kok-Aral Dam was constructed and saw quick success. As the surface area of the sea expanded, fish stocks were reintroduced. The replenishment of local resources meant that the economy, once built on fishing, could flourish and grow to its previous grandeur. The water and air quality also improved, meaning that residents no longer needed to move away from the area.

In 2006, the ports handled around 2,000 tons of fish and houses in the area were no longer empty; about 17 homes were occupied as opposed to eight. As the local fish diet improved, so did the ability to grow vegetables. The changes to the ecosystem led to more rainfall and fewer sandstorms. Life was reintroduced to the region.

A very different story played out in neighboring Uzbekistan, where government leaders are still insistent that cotton production is their “white gold”. The country ranks 12th in highest value of cotton exported in 2017. The enterprise brings in around $850.4 million and accounts for 1.6 percent of total exported cotton.

However, similar health risks and impoverishment are seen in areas previously home to fisheries. Many people migrated to agricultural regions to make a living farming and picking cotton. Conditions around cotton production in Uzbekistan remain questionable, with allegations of forced labor becoming rampant.

The Effects of Developmental Aid Around the Aral Sea on Poverty

Although both countries experienced high levels of poverty at the height of the Aral Sea’s reduction, the current state of poverty in the two countries is quite different. In 2005, 31.6 percent of the country lived in poverty in Kazakhstan, while in 2016, only 2.6 percent of the population lived in poverty. This reduction is directly related to developmental aid around the Aral Sea.

In Uzbekistan, the decline is much slower. From 2012 to 2016, poverty decreased from 15 percent to 12.3 percent. This progress is promising, yet slow compared to its neighbors. When the World Bank asked the Uzbek government if it wished to participate in developmental aid around the Aral Sea, like that in Kazakhstan, it declined.

The Future of Development in Central Asia

In partnership with World Bank, the Kazakh government provides an example of successful developmental aid around the Aral Sea. Currently, the World Bank is working with the Uzbek government to implement projects around horticulture. As new enterprises are explored, such as oil drilling in the south Aral Sea by Uzbekistan, avenues to combat poverty will vary. For Kazakhstan, working to reinvigorate a previously plentiful resource was the key to poverty alleviation.

This triumph in poverty reduction provides a hopeful message to those wanting to see a drastic drop in poverty through developmental aid.