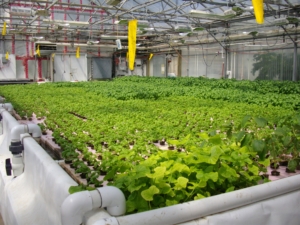 Earth is now home to 7.7 billion people. Of those 7.7 billion people, about 10 percent are currently suffering from chronic undernourishment. With the global population projected to reach 10 billion by 2050, the need for more efficient and effective agriculture practices and systems is critical. Aquaponics, any system that creates a symbiotic relationship between aquaculture (fish farming) and hydroponics (growing plants in water), has the potential to solve this problem.

Aquaponics is any symbiotic relationship between fish that produce excretions of ammonia, bacteria that convert this ammonia into nitrate, and plants that use this nitrate as fertilizer. Overall, it creates a win-win-win situation for these three organisms, which leads to the maximization of available resources.

Many historians believe that the first aquaponics systems were devised in South China in 5 AD. Farmers would raise ducks, catfish and finfish together in rice paddies. During the Tang Dynasty, records of floating rice rafts on top of fish ponds also began appearing.

Modern aquaponics, on the other hand, emerged in the U.S. Interest in the concept is relatively new, as the majority of the progress made in this field has been achieved within the past 35 years. The first closed-loop system, as well as the first large-scale commercial facility, were both created in the mid-1980s.

Aquaponics provides many benefits to its users. In comparison to traditional conventional agriculture methods, aquaponics uses only one-sixth of the water to grow up to eight times more food per acre. Due to it being a closed system and the use of the fish waste as fertilizer, it also avoids the issue of chemical runoff. Because aquaponics produces both a vegetable and fish crop, communities that implement the system would also have access to better nutrition. Protein-calorie malnutrition is often the most common form of nutrient deficiency in developing countries, so providing stable sources of fish protein to such at-risk communities could potentially be revolutionary.

Although it is undisputed that aquaponics would be a game-changer for food production in developing countries, the high initial start-up cost of modern aquaponics — about $20,000 for a small commercial system — remains a significant barrier. Furthermore, technical training on the subject would need to be provided to locals prior to the implementation of such systems. These aquaponics systems also require a consistent source of electricity in order to maintain constant water circulation. This issue, however, can likely be solved through alternative sources such as solar or hydropower. Therefore, a more simplified design is required for implementation in developing countries — one that could withstand shortages of raw materials and professionals as well as a strong technical support system.

Currently, aquaponics in developing countries has mostly been brought about through nonprofits. For instance, the Amsha Africa Foundation started an aquaponics campaign in sub-Saharan African countries. After launching its first project in rural Kenya in 2007, the organization has since expanded into five more countries and positively impacted thousands. The project targets sustenance farmers who do not have an adequate supply of food and water and are living on eroded or depleted soils.

Another similar organization is Aquaponics Africa, a project created by engineer Ken Konschel. The organization works with farmers to build and design their own backyard or commercial aquaponics system. It also sells informational handbooks detailing the process of maintaining an aquaponics system in Africa for just R300, or about $20.

Aquaponics in recent decades has proven itself to be quite revolutionary to the agriculture industry. It provides many benefits over conventional farming, as it is both more efficient and effective. But, for it to be easier accessible by communities and individuals in developing countries, greater headway will need to be made in terms of simplifying its design in order to adapt it to different environments.