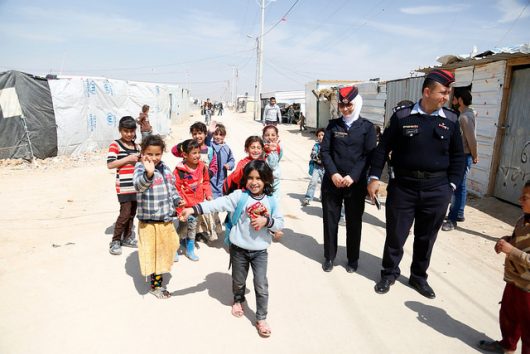 Awareness and Prevention Through Art, otherwise known as AptART, is an organization that began in Mozambique and is bringing together artists and activists. The non-profit organization is aiming “to share with conflict-affected and marginalized youth an artistic experience alongside the opportunity to express themselves.”

In 2012, AptART took its concept beyond the borders of Mozambique, working on a project in The Democratic Republic of the Congo. Since then, AptART has been teaming with local and international organizations creating workshops for kids in places such as Syria, Iraq, Jordan, Turkey, Palestine and countries in Europe. The art created in these workshops varies; some are large-scale street murals while others are smaller individual works. Through their work, the organization seeks to build awareness and promote prevention while creating messages of hope and positivity.

A recent project the organization has been working on is a street art project in Jordan. Jordan has a large community of refugee children, many coming from Syria. In partnership with local Jordan artist Suhaib Attar, they host street art and mural workshops to introduce kids to the community to color and art as a form of expression. Previously, the organization also held workshops for children in Jordan’s Zaatari refugee camp.

Director Samantha Robison from AptART told Al Jazeera, “Our aim is to amplify the voices of marginalized groups and put their ideas and identities in the public space. Street artists have an opportunity to convey a message to a large audience in a way that other artists might not. The world is their gallery; it’s art for everyone.”

Art created through these workshops are exhibited locally and throughout the world. All sales go towards funding the organization’s future projects. Some other major organizations that support and collaborate with AptART are UNICEF, ECHO and Mercy Corps.