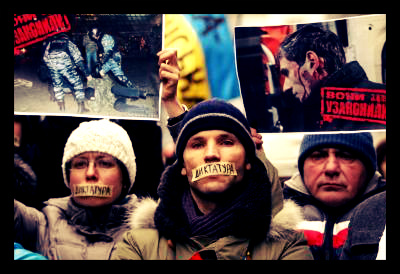 The anti government protests in Ukraine have resulted in the strengthening of authoritarian policies rather than democratic norms. Anti-protest laws were passed by Parliament to thwart the protest movement sweeping the nation.

The laws were quickly pushed through on January 16 by supporters of President Viktor Yanukovich. A show of hands was used to vote rather than the electronic voting system used customarily. Punishment for the crimes listed under the anti-protest laws can range from minor to quite hefty.

Jail sentences range between two years to 15 years for offenses that block entry into buildings or cause public disorder.

Blockading public buildings carries a five-year maximum prison sentence for violators. Masks or helmets worn during protests will get offenders fined or put under administrative arrest.

Lawmakers can also be implicated by the anti-protest laws because it is now easier to prosecute them. Dissemination of slander on the internet was made illegal as well. Violators will find themselves serving up to one year in corrective labor or paying a fine as punishment.

Protesters will have a more difficult time acquiring facilities or equipment for protests. Individuals and organizations will be punished for providing them for unauthorized meetings. Violations result in a fine as high as $1,275 or a 10-day stint in detention.

Tents, stages and amplifiers installed in public places without prior authorization will get offenders fined up to $640 or detained up to 15 days. Protest motorcades are not allowed to have more than five vehicles.

Foreign NGOs are not exempt from the anti-protest laws. Those that are not financed in Ukraine and participate in political activities there will be deemed foreign agents.

The Ukrainian government now has the power of the law to prosecute political opposition and end the protest movement. This is the political opposition’s fear. Batkivshchyna (Featherland) party leader, Arseniy Yatsenyuk, said the anti-protest laws overthrow the constitutional system and are nothing more than a power grab.

Opposing politicians in Ukraine stand on a stage when they voice their support to protesters on the square. Such actions will now potentially land them in jail.

The number of protesters have decreased over time to several hundred people camped out on the Kiev central square or occupying public buildings like the City Hall. New life was given to the movement the Sunday before the anti-protest laws were passed when 50,000 people gathered in Kiev.

The court banned protests in Kiev after the vote, which means a possible police crackdown is underway.

Vitaly Klitschko is a former boxer and now a political opponent who is believed to be strong enough to unseat Yanukovich as president. He stated that Ukrainians have been denied civil liberties and rights. He revealed that the main objective of the Ukrainian people is a change of power.

Ukraine has fallen further away from democratic norms as its voting process in parliament has been expedited by a show of hands and freedom has diminished.

European Union ambassador to Ukraine Jan Tombinsky warned that democratic institutions lose credibility and the legal system is put at risk when norms do not go through the proper procedures. The United States Department of State has questioned Ukraine’s commitment to democratic norms.

The anti-protest laws will not go into effect until they are signed by Yanukovich.