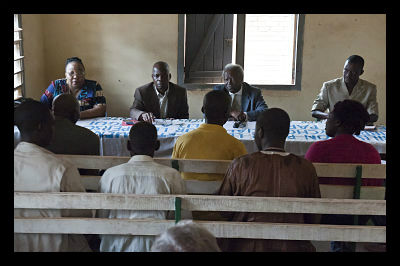 Since President Francois Bozize of the Central African Republic (CAR) was ousted by a coalition of fighters by the name of Seleka in March of 2013, the nation has devolved into anarchy.  Seleka leader Michel Djotodia declared himself president after the fall of Bozize’s government, but he has little control over his Seleka fighters.

The Seleka is a predominately Muslim, rebel coalition made up of several militia factions from the CAR’s civil war.  The Convention of Patriots for Justice and Peace, the Patriotic Convention for Saving the Country, the Union of Democratic Forces for Unity as well as other anti-government groups formed the alliance in mid-2012.

Djotodia cut ties with the group after they were blamed for attacks across the CAR.  In an interview with Al-Jazeera in early September, he admitted the Seleka no longer obey his orders.

On October 26, 2013, the Seleka forces of the CAR took part in a massacre a few miles outside Bouar, killing 18 people.  At least 10 people were killed at Bangui’s Amitie hospital after Seleka troops attacked patients.  Executions, rapes and burglaries by Seleka troops in predominately Christian areas have been reported.

A Christian militia called anti-balaka was formed to fight back against the Muslim Seleka.  The United Nations has expressed concern that the CAR situation may develop into a genocide given the historical tension between Christians and Muslims in the area.  With no legitimate governing body or police force there is a great risk of increased violence between the two groups.

As violence has escalated, President Francoise Hollande of France visited the country to evaluate the conflict.  So far, France has deployed 1,600 peacekeeping troops to the CAR with plans to send up to 6,000 if the fighting continues.

The African Union has sent 2,500 troops and plans to send more in the coming weeks. The U.N. has authorized foreign intervention using “all necessary measures” to support the efforts of the African Union and France.  The troops have been monitoring travel in and out of major towns, checking homes for weapons, and policing neighborhoods in an attempt to mitigate violence.

The United States has promised to donate $100 million in aid to the African Union’s efforts.  Al Jazeera reported that the funding will go to training, logistical operations, planning and non-lethal equipment.  State Department spokeswoman Marie Harf says “The United States remains deeply concerned about the horrific violence committed by the armed groups against innocent civilians.”

President Djotodia released a statement saying he will consider granting amnesty for the militia members in exchange for a ceasefire between the two groups.