Tag Archive for: Annexation of Crimea 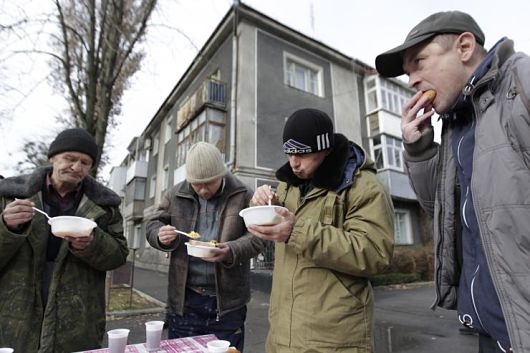 This can come as a surprise to a lot of people, mainly due to the fact that Russia is a part of the Group of 8, an elite group that compromises the eight most advanced economies in the world. Russia has an annual GDP of $2.3 trillion and unemployment hovers around 5.6 percent. These statistics do not paint a picture of poverty.

Given these circumstances, the use of the term “critical” to describe the poverty in Russia is baffling. The impetus to how Russia got here is woven into their annexation of the Ukrainian peninsula Crimea, and the subsequent reaction by the European Union and the United States.

On March 14 of last year, Russian President Vladimir Putin announced that his country would be annexing Crimea, citing the historical ties the peninsula has with Russia. Although Russia claims the Crimean citizens conducted a referendum to secede from Ukraine, NATO says it was illegal and “doesn’t count.” Samantha Powers, the U.S. ambassador to the UN, equated the annexation to “theft.”

In response, the European Union and the United States imposed sanctions on Russia’s finance, arms and energy sectors.

In addition, the Russian elite, many of whom control the businesses that have been impacted the hardest by the sanctions, have been subject to asset freezes and travel restrictions.

A year later, the sanctions have rippled through the Russian and European Union economies. Russian citizens living in poverty number around 22.9 million, roughly 3 million more than last year; this comprises 15 percent of the country. Although unemployment has remained stable, the inflation rate has soared and the value of the ruble, Russia’s currency, has plummeted along with wages.

In addition, the stark drop in oil prices, one of Russia’s main exports, has exacerbated the effects of the sanctions.

The Russian economy is expected to shrink three percent in 2015.

The leaders of NATO and the UN believe that this sends Russia a strong message that its annexation of Crimea, and support of pro-separatist forces in Ukraine, is unacceptable. However, the sanctions have affected more than Russia.

According to research by the Austrian Institute of Economic Research, the European Union economy will be adversely influenced by the sanctions. The report found that 2.5 million jobs will be cut, which would drain nearly 30 million euros from the economy.

Europe depends on Russia for 30 percent of its oil and gas supply. This has been problematic because the sanctions specifically targeted Russian oil and gas companies.

While the sanctions have slowed the Russian economy and isolated the country diplomatically, the residual, mostly negative, effects on some of the countries that imposed them have been counterintuitive.

NATO’s response to the Crimean annexation highlights how interconnected global markets are. Although many world leaders denounce Russia’s actions in Crimea and Ukraine as unacceptable, their response could affect the economic security of millions who have nothing to do with the situation but are living in poverty in Russia.