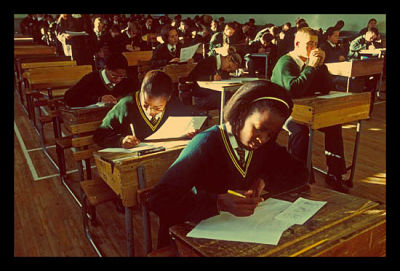 South Africa is one of the most economically imbalanced nations in the world. While it is labeled as upper-middle class by the World Bank, 56.8%  its citizens still live in poverty, according to the last census. According to the government, unemployment is increasing with 25.6% of people without a job, up from 25.2% previously.

South Africa is attempting to address the unemployment problem by improving education. Officials have recently implemented their South African Education Action Plan to 2014 to make sure that the necessary changes are made to the education program so that all people, regardless of race or economic standing, get a proper education and a better chance at getting out of poverty.

The education overhaul began in 2010 when the Minister of Basic Education, Angelina Matsie Motshekga, declared that there would be a new plan implemented to improve the education in South Africa. The Action Plan to 2014 is part of a larger, more in-depth plan that culminates in 2025 simply called Schooling 2025.The larger plan will be implemented as a way for the school board and government to properly monitor school progress against a set of measurable indicators like attendance and literacy. The smaller and shorter-term action plan has been put in place to make sure the schools stay on track towards their ultimate goals.

The plan is comprised of 27 goals that are believed to lie at the heart of their ultimate 2025 deadline. 13 of these are considered output goals that deal with improved enrollment and better school results. This includes making sure that all students remain enrolled in school full-time at least until they are 15. With statistics showing that enrollment steadily decreases as children get older and it makes sense for the plan to at least make sure the children are getting the very basics of education and literacy under their belt. Progress will be and must be slow for things to happen properly.

The other 14 goals consist of what must first be done to ensure that the so-called output goals can be met. These goals include attracting a set of new motivated and properly trained teachers each year. On average, approximately 10,000 people leave the teaching profession every year while only 5,000 enter it. And with a student-teacher ratio of 40 to 1 in the best scenarios, attracting new teachers and retaining current ones is a necessary step for addressing education problems.

The Minister of Basic Education has identified the need to improve the professionalism, skills, subject knowledge, and computer literacy of all teachers for the duration of their careers. While 90% of all teachers have received three years of training, much of that training has been below par and failed to cover all of the necessary skills a teacher should possess. In order for Schooling 2025 to be achieved, teachers must work as hard as students to make sure they are well trained and up to date on all information and skills.

The goals are not the only focus of the plan. The government has attempted to eradicate competition by not publicly listing or announcing each school’s scores in comparison to other schools. The government believes that too much competition will encourage cheating and inhibit the ability to monitor the success of all their changes.

While the school system still needs improvement in South Africa, it is clear that the country is making a solid effort to create successful and meaningful changes. The focus is on what is best for the students and how they can foster a love of learning and self-improvement. The school officials realize that change will not be immediate or fast, but that the most important factor is the education of the children and the resulting decline of extreme poverty in the country.