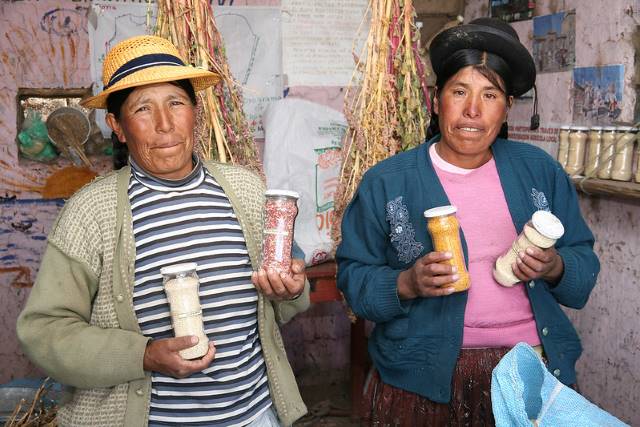 Quinoa is a species of goosefoot original to the Andes of Peru and Bolivia. For more than 6,000 years, Peruvians and Bolivians considered quinoa a sacred crop because of its resistance to high altitudes, heat, frost and aridness. Because of its sudden rise in worldwide popularity, the U.N. declared 2013 the “International Year of Quinoa” to recognize the indigenous people of the Andes, who continue to preserve quinoa for present and future generations. Quinoa supports farmers and livelihoods in Peru.

Due to its high nutritional qualities, quinoa has been grown and consumed as a staple crop by people throughout the Andean region. However, when the Spanish arrived in the late 1500s and sent farmers to gold mines in Peru and Bolivia, quinoa production declined sharply. The year 2013 marked a turning point in quinoa-producing countries. The crop surged in popularity because of its superb nutritional value, containing all eight essential amino acids. It is also low in carbohydrates but high in unsaturated fats, fiber, iron, magnesium and phosphorus. The sudden demand for Quinoa from the U.S. and Europe increased the price of the grain from $3 in 2010 to $6.75 in 2014.

Today, quinoa supports farmers in Peru, as Peru is one of the world leaders in quinoa production and exports. In 2016, Peru produced 80,000 tons of the crop, about 53.3% of the world’s volume, with 47% of quinoa exports worldwide.

The demand and price fluctuations had several negative effects, including reducing the welfare of households. When quinoa prices fell, total household food consumption decreased by 10% and wages fell by 5%.

Though traditionally grown for household consumption only, the global demand for quinoa encouraged farmers to use their fields for quinoa production only. The monocropping negatively affects the overall health of the fields, as nutrients do not get replenished as they would by rotating crops.

With the help of several U.N. agencies and national and local governments within Peru, a program called “Andean Grains” was implemented in Ayacucho and Puno – rural areas with high levels of poverty, where 78% of Peru’s quinoa is produced, to create a value chain of quinoa production to increase the welfare of farmers. Through the program, quinoa supports farmers in Peru in several ways:

Quinoa supports farmers in Peru in several ways. After the implementation of the U.N. “Andean Grains” program, the income and wealth of Peruvian farmers increased. By joining cooperatives, both male and female producers compete in the global competitive market. Today, quinoa continues to be celebrated as a vital part of Peru’s economy and culture.