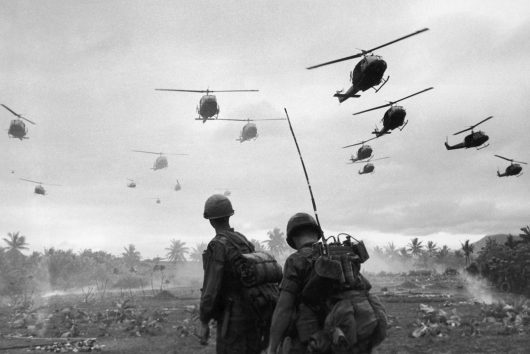 Over the course of 30 years, the Vietnam War not only contributed towards the intensity of the Cold War but also directly resulted in mass displacement and escalating poverty as Vietnamese refugees fled the region. The humanitarian emergency that the debilitating conflict created also impacted neighboring nations like Laos and Cambodia.

In an effort to contain Communism in then Indo-China, the U.S. began to progressively involve itself in the growing hostility between the North and the South. The U.S. aspired to salvage Ngo Din Diem’s regime in the South despite his unpopularity among the working class and the priests so that it could control the excesses of Ho Chi Minh’s communist guerilla group, the Viet Cong.

After the Gulf of Tonkin Resolution was passed, the U.S. became fully embroiled in the war. Record amounts were spent on military support to Vietnam, including chemical weaponry such as weedkillers, napalm and Agent Orange. The guerilla warfare tactics, coupled with public outrage in the U.S. after atrocities during the My-Lai massacre brought an end to the war after the Fall of Saigon.

The Vietnam War is reminiscent of yet another situation we see today with the refugee crisis, brought about by persecution and human rights violations.

8 Facts of Vietnamese Refugees and the Vietnam War

In an effort to halt the spread of communism, there was a tremendous cost to human life. Only time will reveal the full extent of U.S. and U.N. humanitarian assistance in aiding Vietnamese refugees.