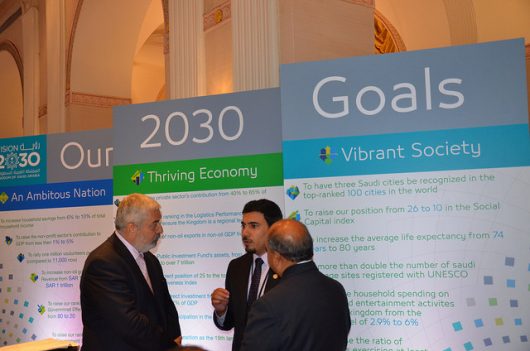 With the recent rise to prominence of the Crown Prince Mohammad bin Salman, the Kingdom of Saudi Arabia has committed to a vast economic and social reform plan. The Kingdom’s strategy is in its initial stages, but early signs indicate how the promise of socioeconomic Saudi Arabian reform opens markets for American business.

The ambitiously conceived Saudi Vision 2030 is a reform plan for diversifying the Kingdom away from its traditional dependence on oil revenues. The plan’s goals are varied, with objectives ranging from enhancing the competitiveness of non-oil sectors, such as leisure and tourism, to increasing women’s participation in the workforce from 22 to 30 percent.

Although it is in its early stages, the plan has made some progress toward its social liberalization goals, providing an ongoing illustration of how Saudi Arabian reform opens markets. After the Saudi Ministry of Culture ended a 35-year ban on movie theaters late in 2017, the Chinese-owned, American-operated AMC Theaters obtained a license to open 30 movie theaters over the next 5 years as part of a joint operation with the Saudi government.

This expansion isn’t limited to AMC: one Saudi official estimates the cinema market to reach $21.3 billion over the next 10 years, and companies such as the U.K.-based Vue International and Imax of Canada plan to open 30 and 20 theaters in the Kingdom in the coming years, respectively.

Beyond theatrical entertainment, the emphasis on promoting tourism in the reform plan is opening up investment opportunities for international hospitality companies and employment opportunities for local women. Marriott International’s managing director for the Middle East and Africa has said that the demand for new hotels in the country has been steady, with the company scheduled to more than double its hotels in Saudi Arabia from 23 to 52 by 2022.

And an increasingly greater shares of the jobs created in this industry are being filled by women. Saudi women appear to be more amenable to working in the hospitality sector than their male counterparts, the latter tending to seek roles in traditional public or energy sector jobs. In fact, a 2017 working paper by the Saudi Arabian Monetary Research cites researchers’ belief that women will an essential role in the tourism sector.

The social progress made by Saudi Vision 2030 is incremental and should not be overstated. The merits of the highly publicized repeal of a ban on women being granted a driver’s license are countervailed by the country’s continued human rights violations, such as this month’s arrest for dissent of women activists who had fought in previous years to overturn that very ban.

A Decade For Progress

However, as the name of the reform plan suggests, the timeline for Saudi Vision 2030 completion is over a decade.

A final judgment of its success will take time, but incremental progress to date shows how, if implemented, social and economic Saudi Arabian reform opens markets and could enhance opportunity for international businesses. The plan could also liberate opportunities for both male and female residents of the Kingdom in the coming years.