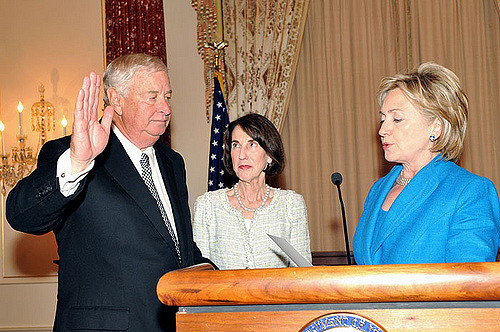 On August 19, 2017, Rep. Frank Pallone Jr. wrote to President Donald Trump urging him to appoint a U.S. ambassador to India.

As of August 4, President Trump has only nominated 36 of the 77 ambassador posts he is authorized to fill. In an unprecedented move, Trump has not allowed any appointed officials from the Obama administration to reapply for their positions, opting instead to fill all the positions himself. Despite this decision, Trump is nominating ambassadors slowly compared to past administrations.

Rep. Pallone was motivated to write to President Trump after the president announced that the U.S. would increase troops in Afghanistan and put pressure on India and Pakistan to do the same. Pointing out that India is one of the U.S.’s strongest allies in south Asia, Rep. Pallone claimed that the appointment of an ambassador to India is “long overdue.”

U.S. ambassadors are the president’s highest-ranking representatives assigned to a foreign nation or organization. They reside and keep offices at embassies, which are centers for U.S. diplomatic affairs located in the capital of a given country. Ambassadors are strong leaders adept at negotiation. Most importantly, they promote peace and prosperity while helping to support U.S. interests abroad.

Even when U.S. ambassadors aren’t working on issues concerning global poverty, their efforts can help reduce global poverty indirectly. The more stable the political and social climate of a given country is, the more opportunity there is for local growth in the economy, agriculture, education, health and other sectors. In turn, stable countries with a diminishing poverty rate benefit the U.S. as they become more viable markets.

When Trump appoints ambassadors to India and the other 76 posts he has yet to fill, the ambassadors will surely reinforce the U.S.’s relationship with individual countries. However, the appointment of ambassadors is important on a global scale because it will demonstrate that the U.S. takes the well-being of diverse peoples seriously and means to thoroughly address political, economic and social disparity in different countries.