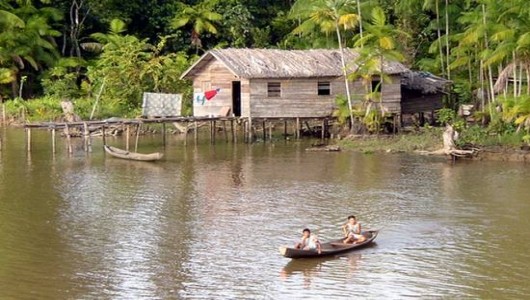 In Brazil, home to the world’s largest Amazonian rain forest, an ever-increasing number of young children are joining the workforce as so-called “river children.” These river children make a living and help support their families by canoeing up to the side of larger barges and tourist boats, where they climb on board and attempt to sell goods such as ingas, an elusive jungle fruit that is particularly popular with ferry passengers.

Following a process of bargaining, the children then climb off the boats with the few rials earned in their pockets, only to have to canoe back home for the entire length of the river that passed beneath them while they were above deck.

An Al Jazeera documentary created in 2011 and reviewed in the past week, titled The River Traders of Brazil, helped shed light on the shadowy lives of Brazil’s “River Children.” The documentary focused on the life of Jesse, an 11-year-old boy who lived along the narrowest stretch of the Tajapuru River in the Amazonian basin in northern Brazil.

Jesse, like the other river children working on the Tajapuru river, made a few rials for his family of 12 adults and 16 children by engaging in the river trading business. As the beginning of the documentary illustrates, Jesse and the other river trader children were initially tolerated and even treated warmly by crew members on the barges. The opening scene pans to an image of Jesse and a young girl sharing a plate of pasta in the underground cabin of a boat, with the narration smoothly announcing over the image “on the boat, there is always food set aside for the river children.”

However, as the documentary progresses, noticeable friction between the river children and the adult crew workers grows more and more. A captain, who claims that he always takes down the names of the river children, tells the camera that the information he has been taking down in his notebook has been increasing in recent years, with an ever-increasing number of stray children climbing aboard.

Further on in the documentary, it becomes obvious why.

Jesse, like his fellow classmates, attended school—which was an hour away by canoe—sporadically at best (the documentary claims he never went for longer than one month at a stretch). A scene with Jesse and his teacher films them on opposite sides of an argument: the teacher, trying to encourage the children to come to school more often, argues, “You are already so good on boats. Think about how much better you could be if you knew how to read and write.”

But Jesse, who comes from a family where the existence of daily food depends upon the pennies brought into the house each day by river-trading activities, counters that making the one-hour canoe journey in search of an education is ultimately futile.

Later in the documentary, the friction between the crew and the children reaches its breaking point, with the crew becoming openly more hostile to the swarms of young children tying their canoes to the sides of their boats.

The viewer discovers that part of this hostility lies in the fact that young river children, frustrated with the instability that a river trade life has to offer, have begun to turn to piracy. Jesse, along with his brothers and some of his cousins also turned to crime, only to come to a fatal end shortly thereafter following an attempted heist where he was killed by an angry crewman.

The fate of Brazil’s river children is little known outside of the small Northern Amazonian river communities directly affected by river trade activity. Yet the Al Jazeera documentary, initially filmed in 2011, and reviewed more recently within the past week, marks an important first step in unearthing the dangerous lives lived by so many desperate and juvenile Brazilian children. The young individuals risk everything, rowing against raging and intolerable currents and facing intolerance, even violence, at the crew members who await them, in the hopes of earning a few pennies for their families a day.