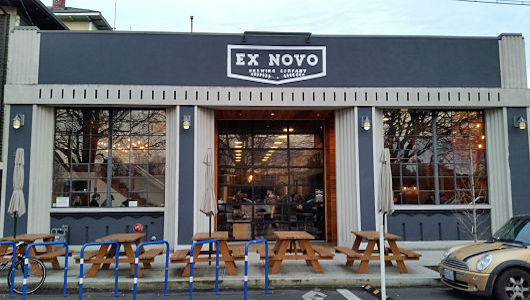 A company that unites good beer, good food and good causes seems too good to be true. But the Ex Novo Brewing Company in Portland, touting itself as “a 10-barrel non-profit brewery,” is making this dream a reality.

The charitable brewery was founded by former engineer Joel Gregory, who stated in an interview with Portland Monthly Magazine that he “felt compelled to help in any way.” And with the brewery’s charitable efforts supporting causes such as Mercy Corps’ work with Syrian refugees and the International Justice Mission, Mr. Gregory is helping.

The alcohol industry is not exactly known for its charitable efforts. By taking the growing craft beer craze and using it as an opportunity to do good, Ex Novo is bringing charity to the beer industry, and bringing change to the world.

And they’re doing it deliciously. Food items served at the brewery include bacon, cottage pie and a pork meatball banh mi. Beers include Irish Stouts, IPAs and a variety of Saison brews. In addition, the brewery serves homemade brownies and a stout milkshake.

The first non-profit brewery is receiving nothing but praise for these features. Customers on Yelp praise the non-profit nature of the establishment, along with the charitable brewery’s expansive food and drink menu. Though Ex Novo does not currently bottle or can its beer, it can be found on tap throughout the Portland area.

Opened in July 2014, it would appear that the one-year-old brewery is making a big splash in Portland. And with its delicious menu and good reputation, the organization can change both lives and tastes.

Only time will tell if Ex Novo’s conception of the not-for-profit brewery will have an impact in the beer industry. Through its support of Mercy Corps’ fight to end the cycle of refugee poverty and the International Justice Missions’ fight against global systems of exploitation, Ex Novo is a wonderful example of a local business making a global difference in the fight against poverty.