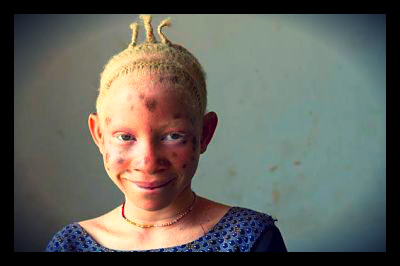 Albinism is a genetic medical condition diagnosed at birth, characterized by lack of pigment in the skin, eyes, and hair. The rare condition is found in 1 in 20,000 people worldwide. Albinism is more common in Africa than other parts of the world. Unfortunately, when it comes to the Democratic Republic of Congo and Tanzania, uneducated communities often react to Albinism in severely discriminatory ways.

Beyond discrimination toward Albinos, many uneducated Congolese and Tanzanian inhabitants believe strongly in several superstitions about the Albino population. To some of these inhabitants, people living with Albanism need to be hunted down by witch doctors, for their body parts are considered to bring luck and wealth on the battlefield. According to United Nations High Commissioner for Human Rights, Ms. Navi Pillay, many of the attacks lead to “dismembering (of) people, including children, while they are still alive.”
One child, in particular, has managed to flee with the help of his supportive family. According to a press release on October 14, 2013, Father and Mother, Anaclet and Solange, are deeply concerned for their son Jeff, a child with Albinism.

For the most part, the family lived a peaceful life. When Jeff was five years old, a member of the Mai Mai militia group broke into the family home, knocked him unconscious and stuffed him into a bag. His father awoke, and with the neighbors help, they were able to get Jeff back. After this attack, the Mai Mai demanded Jeff be given back, or pay 10,000 dollars. If  they failed to respond, they would all be killed.

After the initial attack, the family fled, staying with reletives, in North Kivu, but ultimately were forced back to South Kivu to escape fighting between Congalese government and members of the M23 rebel group. They decided to head to Burundi, where they were secure for a while. On August 6, 2013, a grenade was thrown at the family home. At this point, the family reached out for help from the UNHCR, as well as the local government’s National Commission for the Protection for refugee and Stateless People. The family is protected at this time, while officials are figuring out permanent solutions.

The UNHCR has teamed up with a local group called Albinos San Fronières and launched a campaign in Burundi to raise awareness about Albinism. Catherine Huck, UNHCR’s representative in Burundi, hopes, “the partnership will contribute to a greater respect of the rights of people living with Albinism.” Additionally, the aforementioned UNDP, and the Association for the Protection and Development of Albino People in Orientale Province are organizing workshops, which seek to promote the issue among international organizations, and appeal for funding.