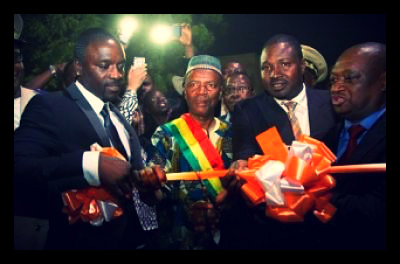 Every day, 600 million Africans live in the dark with no access to electricity, which is making it difficult for students to read, clinics to properly store vaccines and businesses to operate outside of natural light hours.

The energy crisis in Africa, particularly in the Sub-Saharan countries, leaves many people in poverty. In a place where work stops when the sun goes down, it is hard to advance in the workplace, which is making employment opportunities scarce. And, when power is available, it is often unreliable and can cause power outages.

Senegalese pop-star Akon, in partnership with Give1 Project and Africa Development Solutions Global Corporation, aims to give electricity to one million households in nine West and Central African countries by the end of 2014.

Originally from Senegal, Akon, whose real name is Aliaune Badera Thiam, is on tour of the beneficiary countries to meet with presidents and leaders.

“We wanted to focus the project on rural areas because we often forget that our parents in these remote areas need electricity,” Akon was quoted saying after meeting Burkinabe President Blaise Campore.

Akon was born in St. Louis to two musician parents; he spent much of his childhood in Senegal. Despite living in the United States, Akon keeps his homeland in the forefront of his business ventures.

He started a charity in Africa that aims to empower youth by promoting health and education. The Konfidence Foundation concentrates its efforts in Senegal and West Africa, but Akon hopes the foundation will serve as an international platform to empower individuals, communities and nations.

Akon Lighting Africa is the pop star’s most recent project that aims to help Sub-Saharan African countries become self-sufficient. The sustainable energy project has a mission to help the infrastructure, education and economy of the beneficiary countries.