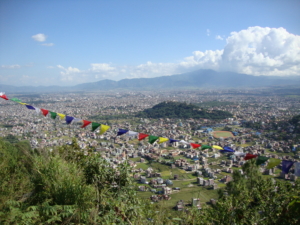 Located in a bowl-shaped region enclosed by four mountain ranges, the Kathmandu Valley is Nepal’s most populous and developed metropolitan area. However, with the valley’s population density, level of industrialization and geographic location, a host of problems afflicts the region. In recent years, the international and domestic communities have paid increasing attention to the worsening issue of air pollution in Nepal’s Kathmandu Valley. In Nepal, air contains five times more pollutants than the amount considered safe by the World Health Organization (WHO); the air in the Kathmandu Valley contains ten times the pollutant concentration set forth by WHO guidelines.

The Urban Health Initiative (UHI), an on-the-ground pilot program initiated by the WHO, has identified four primary sources of air pollution worldwide:

The geographical location of the Kathmandu Valley exacerbates all four sources of pollution. Since tall mountain ranges enclose the region, the valley does not get enough wind to disperse air pollutants. Furthermore, Nepal’s location between China and India means that the contaminants from both countries flood into Nepal and vice versa.

Air pollution has had a massive impact on Nepalese people. Every year, 35,000 people in Nepal die from illnesses related to air contaminants. Air pollution frequently causes osteoporosis, heart attacks, dementia and kidney diseases. Furthermore, the life expectancy in the Kathmandu Valley is four years less than that of other Nepalese regions.

While the government has taken little action to reduce the region’s concentration of air pollutants, the Nepalese people have taken matters into their own hands. People have started to wear face masks day-to-day, cancel outdoor activities and frequently monitor air pollution levels. Although individuals have shown an admirable degree of agency in protecting themselves, the Nepalese government must take greater action to reduce the risk of air contaminants for its people.

To address air pollution in Nepal’s Kathmandu Valley, the Nepalese government has released a National Plan for Electric Mobility (NPEM) that contains several time-oriented goals. The NPEM includes several objectives: increasing the share of electric vehicles to 20% by the end of 2020, cutting fossil fuel use in the transport sector 50% by 2050 and developing a hydroelectric powered rail network by 2040. The NPEM focuses on pollution caused by transportation, and this emphasis has shown promising results.

Due to the COVID-19 pandemic, automobile use has decreased significantly in Nepal. The air quality index in April 2020 showed a noteworthy improvement compared to April 2019: the air on April 30, 2020, contained about 50% fewer contaminants than the air the year prior. Therefore, the government should be able to achieve significant improvements in air quality by targeting automobile emissions.

In 2015, USAID launched the five-year, nearly $10 billion Nepal Hydropower Development Project (NHDP). With this project, USAID aimed to assist in the development of hydroelectric power services. Nepal has impressive hydroelectric capabilities and, if the country harnesses its full hydroelectric potential, it could even have an energy surplus to export to neighboring countries and gain additional revenue.

As Nepal and international organizations improve the country’s air quality, a successful continued response will require cooperation. Given Nepal’s landlocked location, collaboration with other countries such as India and China is also necessary. However, in light of the efforts of the Nepalese government and USAID, Nepal is taking steps in the right direction to improve its air quality for the benefit of everyone in the region—especially those in the vulnerable area of Kathmandu Valley. Ultimately, there is hope to combat air pollution in Nepal’s Kathmandu Valley and protect the health and safety of thousands.