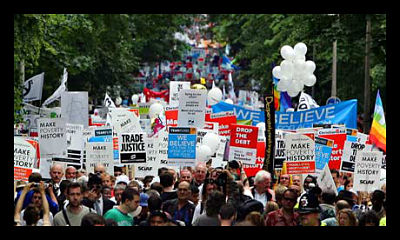 Make Poverty History (MPH) is staging a worldwide campaign. Its mission statement matches its name as it aims to raise awareness about global poverty and make concrete policy changes in various nations’ governments and in intergovernmental organizations.

The various national Make Poverty History campaigns are part of a larger international campaign called Global Call to Action Against Poverty, a worldwide alliance committed to making world leaders live up to their promises and ending global poverty.

In comparison to other aid organizations that may struggle trying to apply single, cure-all strategies on a universal scale, MPH has experienced such widespread success because each participating country can focus its national campaign on different issues within the broader topic of alleviating global poverty.

Despite these slight variations, however, all countries generally focus on issues such as aid, trade, and justice that are relevant to the UN’s eight Millennium Development Goals. Besides alleviating global poverty, MPH also aims to reduce the corruption that plagues many developing countries’ governments and prevents foreign aid from reaching the poorest members of society.

For example, the British MPH campaign is a coalition of charities, religious organizations, trade unions, and celebrities whose campaign slogans include “trade justice,” “drop the debt,” and “more and better aid.”

The call for “trade justice” demands a global trade system that does not allow half of the world’s population to live on less than $2 USD per day. This aspect of the campaign seeks to prevent the wealthiest countries and individuals from reaping all of the trade benefits at the expense of the impoverished.

Meanwhile, the “drop the debt” aspect of the campaign suggests canceling unpayable debt of the world’s poorest countries without cutting these countries off to the prospect of future aid. This includes creating a fair and transparent international process to ensure that human needs take priority over debt repayments .

Finally, the “more and better aid” component notes that increasing the proportion of national budgets allocated to foreign development aid will not make much of a difference unless nations can also change the way in which they deliver their aid. MPH believes that targeting aid specifically to basic health care and education, rather than giving money to governments for further allocation, is the best way to avoid corruption and address the underserved people’s true needs.

While both the MPG and its parent campaign were originally created as a one-time-only campaign in 2005, the dual campaigns’ continued success have spurred leaders to extend the campaigning alliance until at least 2015. MPH is now considered the biggest, most widespread anti-poverty movement in history.

The leaders of MPH acknowledge that, despite its many successes, the fight against poverty continues on. Through campaigning, fundraising, and fighting to make their voices heard by politicians and policy makers around the globe,  MPH can ensure that the fire it has ignited in the hearts of its followers never dies.