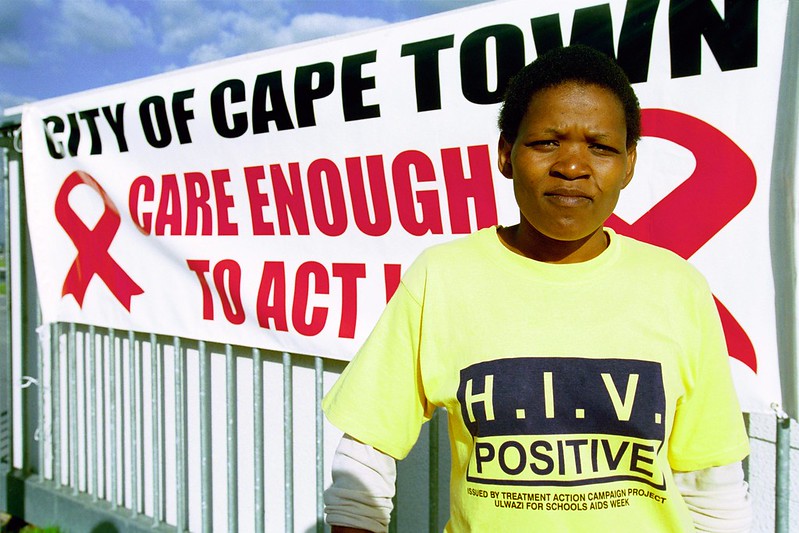 According to the Joint United Nations Program on HIV/AIDS (UNAIDS), South Africa has the largest population of people infected with HIV globally. One of the first countries afflicted with the epidemic in the 1980s, South Africa holds one eighth of the world’s AIDS population. One in nine South Africans and one in four adults are infected. The civil society response to HIV in South Africa has been crucial in addressing the virus and encouraging the government to take action as well.

South Africa’s HIV statistics are staggering, even in comparison to other countries with large numbers of infected people, like Brazil and India. The problem of HIV in South Africa results from the government’s inadequate response to the epidemic until 2008. Manto Tshabalala-Msimang, the nation’s health minister from 1999 to 2008, refused to promote efficacious treatments such as antiretroviral therapy (ART). He called the antiviral treatments, widely endorsed by the global scientific community, “poison.” Tshabalala-Msimang instead promoted unscientific and largely ineffective treatments such as vitamins, beetroot and garlic. None of these have been shown to protect the health of people who are fighting the effects of the virus.

The year 2002 marked a turning point for the civil society response to HIV in South Africa. AIDS activists and others pushed back against a government policy that attempted to stifle access to effective treatments. In a historic judgment that initiated the fall of Tshabalala-Msimang, the South African courts ruled in favor of the activists. The ruling forced the government to take a more proactive role in fighting the epidemic. Later in 2006, the South African government established a national policy addressing HIV/AIDS following court processes instigated by AIDS activists. This policy broadened the distribution of life-saving drugs such as ART, addressed the shortage of healthcare workers and improved the treatment of HIV in pregnant women.

The South African government’s policies of misinformation and its ill-advised public health approaches to the epidemic worked to downplay the virus as a pressing threat. Because of Tshabalala-Msimang’s respectability and position of power, his rhetoric only fueled AIDS deniers. Still, South African scientists, medical professionals and activists banded together to challenge the government’s deadly inaction with the civil society response to HIV in South Africa.

From the onset of the epidemic, NGOs, CBOs, faith-based groups and activist groups took action to promote the treatment and prevention of HIV/AIDS. This civil society response to HIV in South Africa effectively addressed the acute inadequacy of the government’s response. These groups understood the importance of comprehensive responses to HIV even before international agencies drew connections between the various moving parts associated with the virus. For example, they emphasized the importance of condoms, bringing a wide range of issues into the public eye. Additionally, the groups stressed information, education and communication (IEC) initiatives to stop the spread of HIV/AIDS.

A large part of the civil society response to HIV in South Africa, AIDS Foundation South Africa (AFSA) was the first registered AIDS NGO in South Africa, and it is currently one of the largest. The organization recognizes the complexity of the virus and the need to address it in a comprehensive way. AFSA focuses on a combination of treatment, prevention, child protection, food security, education and access to basic services. Additionally, AFSA recognizes that different communities have different needs when it comes to AIDS treatment and prevention. As such, the organization serves as a liaison for smaller organizations that might require research, funding, strategies and general aid.

In 2012, for example, AFSA conducted a program in KwaZulu-Natal to engage in work that supported various community programs. These programs included AIDS education and testing, childhood development, community care programs and food security endeavors. The organization is currently on track to meet its 2020 goal of 90% of all people living with HIV to know their status. It also aims to have 90% of all people diagnosed with HIV receiving ART and 90% of people receiving ART having viral suppression, a sign of the treatment’s efficacy.

The importance the civil society response to HIV in South Africa is especially clear with the resignation of President Mbeki as well as Tshabalala-Msimang. Elected in 2009 by a large majority, President Jacob Zuma ran on a campaign that acknowledged the urgency of stopping the spread of HIV/AIDS in South Africa. Once elected, Zuma appointed Dr. Aaron Motsoaledi as minister of health. Motsoaledi turned the government’s focus to HIV response.

During Zuma’s term, which ended in 2018, South Africa launched a massive national HIV counseling and testing campaign (HCT), and Zuma himself publicized his HIV test. This campaign also included large-scale medical male circumcision (MMC), which mitigates the spread of the virus in many cases. By the end of 2010, more than half of adults and a third of children eligible for ART were receiving the treatment. Furthermore, the average price of HIV drugs decreased by more than 40% between 2010 and 2014.

South African society has made monumental strides in addressing HIV/AIDS. However, stigma against several groups particularly afflicted by the disease stands in the way of a truly holistic response. For example, transgender women in South Africa are two times as likely to have HIV than men who have sex with men, but they are routinely excluded from studies and comprehensive care. Additionally, HIV among sex workers is as high as 71.8% in Johannesburg. Because sex work is criminalized in South Africa, AIDS treatment and potentially life-saving health information are less accessible. To more fully address HIV/AIDS, South Africa will have to turn to these issues next.