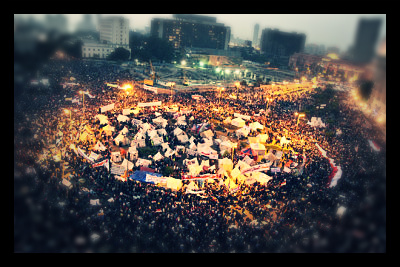 During a 2011 revolution in Egypt, filmmaker Jehane Noujaim set out to document the downfall of President Hosni Mubarak’s regime. Armed with cameras, the people of Egypt took to the streets in protest.

The group sets out to capture the injustices of the regime and the following military dictatorship. The film is wrought with brutal scenes of torture and police brutality.

Magdy is tortured, Ahmed is shot and many of their friends are killed. Originally, the film ended with the overthrow of Mubarak’s regime and military rule, but as discontent with the election brought people back into the square, Noujaim returned to Egypt to continue shooting.

After the overthrow of the regime, Muslim Brothers, secularists, leftists and Coptic Christians, who once joined hands on the front lines, turned on each other.

Magdy is left conflicted, as he finds his organization firing upon his friends from the square. Discontent with President Mohamed Morsi’s policies, the people of Egypt took to the streets in the largest public demonstration on record—20 million people.

The film ends with Mori stepping down. People seem hopeful for the future of Egypt. They know the people of Egypt are a powerful force, capable of taking down dictators and unjust regimes. However, no clear leadership has emerged that unites the many sectors of Egypt’s population.  It is unclear how the Egyptian Revolution will end.

Noujaim’s film is a standout for best documentary of 2014. It is powerful, moving and gives a face to the headlines coming out of Egypt.