Tag Archive for: Aid to Yemen 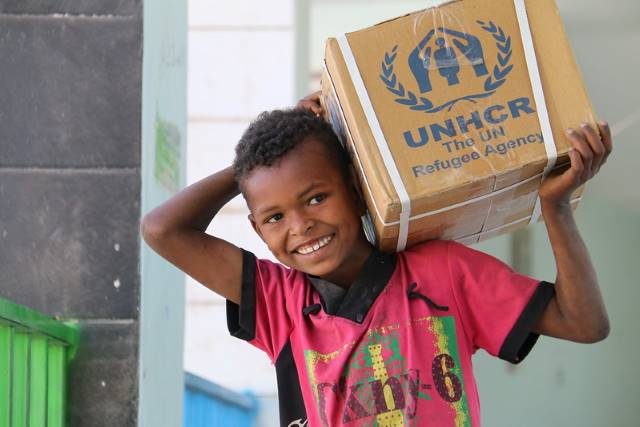 Relief for Yemen has long been a goal of humanitarian politicians and activists. A bipartisan letter, signed by four U.S. senators, urges the Biden administration to allocate more federal funding for aid to Yemen.

The Letter of Appeal

In March 2021, international donors raised $1.35 billion in humanitarian aid for Yemen, falling short of the United Nations’ target goal of $3.85 billion, the estimated amount required for a comprehensive humanitarian response. As one of the most powerful countries in the world, the U.S. pledged only $19 million, much less than Oxfam’s recommended $1.2 billion.

All the while, close to “50,000 people in Yemen are living in famine-like conditions” and the conflict threatens to plummet another five million people into similar conditions. The conflict itself has already claimed tens of thousands of civilian lives. The humanitarian crisis and poverty brought on by the conflict have compromised the food security of more than 20 million people, accounting for two-thirds of Yemen’s population. The United Nations warns that “400,000 Yemeni children under the age of 5 could die from acute malnutrition” without swift humanitarian action.

Efforts to End the Crisis in Yemen

The open letter came around the same times as renewed calls for a ceasefire from the international community. Senator Murphy was in Yemen when the letter was released, joining Tim Lenderking, the U.S. special envoy for Yemen, as well as diplomats from Europe, with the hopes of brokering a ceasefire between Houthi rebel factions and the Saudi-led military coalition. Participants in the meeting demand an end to war crimes actively committed by both sides. The Biden administration has backed away from weapons sales in an effort to mitigate the conditions. But, the conflict and subsequent crises continue, requiring increased aid to Yemen.

UNICEF and the UN Assist

One of the priorities of UNICEF’s efforts in Yemen is to treat cases of acute malnutrition in children and assist children whose lives have been overturned by the continuous military conflict. Efforts range from facilitating access to therapeutic foods and educating children about the dangers of explosives scattered throughout the country. UNICEF is also restoring damaged schools in an effort to develop secure spaces for children to continue learning.

At a time of resurgent violence coupled with the COVID-19 pandemic, foreign aid groups have stepped up relief measures in anticipation of increased demand for food. In one particular hotspot, within the Ma’rib Governorate, the intensification of military conflict has displaced at least 2,871 families. The U.N. Regional Coordination Team for Ma’rib aims to assist about 200,000 people in the area. Sanitation, nutrition and shelter remain top priories for these efforts.

Despite the scale of the crisis, international aid groups remain determined to provide relief. Senators, leaders and foreign diplomats are continuing efforts to broker a peace deal. The severity of the humanitarian crisis in Yemen requires broader support from the global community in order to upscale efforts and comprehensively provide aid to Yemen. Since the civil war in Yemen started in 2015, conflicts have left the country facing the worst humanitarian crisis in the world. In the five years since the violence broke out, more than 3.6 million people have fled the country, and 24 million people, about 80% of the entire country, are in need of some form of humanitarian assistance—a figure that includes 12 million children. Two in three people in Yemen are not able to afford food, leaving half of Yemen in a state of near starvation. Over 70% of the country faces a severe shortage of food, safe water and healthcare, and there have been over one million cholera cases, 25% of them being of children. Save the Children in Yemen is working to aid children affected by the humanitarian crisis and the COVID-19 pandemic.

The Yemen Crisis Amid COVID-19

With the COVID-19 pandemic, Yemen has plunged deeper into poverty. The health care system is crumbling, with 50% of health facilities not operating and a lack of basic equipment, such as masks and gloves as well as medical equipment to treat COVID-19 like oxygen and ventilators. Health care workers are working without an income. Yemenis children under the age of 5 now experience the highest rates of acute malnutrition ever recorded, the number reaching half a million children in southern Yemen.

Even before the pandemic, a child died every 10 minutes due to preventable diseases, such as diarrhea and malnutrition, as there are no doctors in 20% of Yemeni districts. Amid the Yemen crisis, children are killed and injured, their schools are shut down and health care facilities are closed. With the situation leaving children more vulnerable than ever, the danger driven by war and poverty is now even further amplified by the pandemic.

Yemen’s unstable health care system is nowhere near equipped to handle the surge of COVID-19 cases amid the pandemic. In the entire country, there are only 500 ventilators and four labs for COVID-19 testing for a population of nearly 30 million. Despite the lack of preparation and available resources, there have been more than 2,000 COVID-19 cases in the country as of October 2020. The number of malnourished children under the age of 5 could rise to 2.4 million by the end of the year.

Save the Children Leading Child Aid in Yemen

With the support of donations, Save the Children has kept 75 of its health care facilities operating. Especially for displaced or refugee children, it is almost impossible to practice social distancing and sanitary precautions, thus increasing the risk of spreading the virus. To combat this, Save the Children is distributing sanitary supplies and providing health care to protect vulnerable children in Yemen. The State of Yemen has been embroiled in a civil conflict since the early days of its U.S. and Saudi-backed establishment in 1990. Throughout the following two decades, various political and religious groups vied for power against the rule of Ali Abdullah Saleh. This power was mainly secured through a state of military patronage – meaning that his rule was “legitimized” by military prowess and a persistent framing of political and economic issues as the domain of military families.

As a result of local and international criticism of the ruler’s human rights violations, Arab Spring protests brought about a transition of power to his Vice-President, Abed Rabbo Mansour al-Hadi. It was during this time of instability that the modern crises began to unfold.

The main actors in the modern conflict, as of 2014, are Hadi’s government (backed by Saudi and the U.S.), Houthi Shi’a rebels (backed by Iran), and Al-Qaida (supported by some disillusioned supporters of Saleh). The ensuing conflict has been marked by Saudi and Iranian proxy-interference and a seemingly hopeless humanitarian situation.

Prior to the establishment of the Yemeni Arab Republic in 1990, the country was already the regions most impoverished. Water was scarce, reliance on foreign imports high and the governance constantly challenged. Now, after four years of conflict, the hope of a speedy reconstruction process has been lost and the civilian casualties are catastrophic. The U.N. humanitarian aid official in Yemen has confirmed that the number of civilian casualties has risen to over 10,000.

Currently, four out of five Yemenis – a population of 25 million – are in need of humanitarian assistance. These people face starvation, water pollution and rapid spread of disease, to say nothing of the daily toll of war on their psyche and community affiliations. Yet, the most horrific reality of this situation is the lack of humanitarian aid to Yemen that has been provided, mainly due to the unyielding air raids and mortar attacks which specifically target civilians.

In a more forgiving context, the goal would be to provide food, medicine and various structural support upon the brokerage of a ceasefire. Unfortunately, to date, the success of such a deal in Yemen has been unattainable.

In 2017, the United Nations Office for the Coordination of Humanitarian Affairs (OCHA) estimated Yemen’s needed aid at $2.3 billion. In the same year, the largest financial contributor to the crisis, the U.S. government, provided around 23 percent of the needed aid. The U.S. contribution was followed by aid from Saudi Arabi and the United Arab Emirates. In total, the amount of aid pledged by the international community covers 56 percent of the need.

Of the aid provided, 33.7 percent has been allocated to cover food security programs and 15.3 percent has been put towards health assistance. The main recipients of this funding are the World Food Programme, the United Nations Children’s Fund, the World Health Organization, and the Red Crescent Society of the United Arab Emirates.

The Discrepancy in Humanitarian aid to Yemen

With nearly half of all humanitarian aid to Yemen going to food and health programs, the amount remaining for other necessities – which affect the long-term viability of the country’s survival – are severely underfunded.

Currently, only one percent of aid is being given to Save the Children, an international humanitarian organization that works to ensure the protection of Children’s Human Rights. Furthermore, only .2 percent has been allotted to the United Nations Population Fund (UNFPA), which typically works on issues of reproductive rights and safety and ending female genital mutilation.

At the moment, the provision of food and health aid is most urgent, however, it is vital to ensure further funding for programs that will help Yemen rebuild after the crisis.