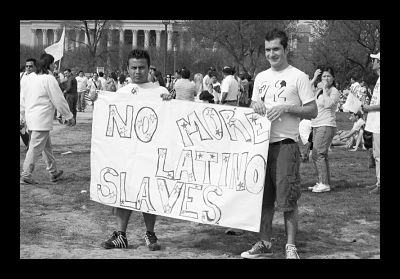 President Obama has called it an “urgent humanitarian situation.” The Department of Homeland Security has estimated that 52,000 youth have arrived across the border from Central and South America since October 2013. There are some as young as five, and 74 percent of all illegal youth have been coming from Central America’s Northern Triangle: Guatemala, Honduras and El Salvador.

Violence, gangs, and economic hardships run rampant throughout this area. According to a report from the United Nations High Commissioner for Refugees, 58 percent of the 400 youth the agency interviewed “had suffered, been threatened or feared serious harm.”

Honduras has the highest homicide rate in the world ,with 90.4 people in every 100,000 being murdered. El Salvador has the next highest and Guatemala is fifth. These three countries are also among the poorest in the Western Hemisphere, with 30 percent of Hondurans living on less than two dollars a day.

Officials have told advocates that they expect the number of unaccompanied minors crossing the border to reach 74,000 by the end of 2014. “Undocumented migrant youth is not a new challenge,” says Lori Kaplan, President and CEO of the Latin American Youth Center. “What is different about today’s crisis is the magnitude and the visibility.”

The images have been so startling that the President has asked Congress for an additional $1.4 billion to deal with the youth influx by creating a multiagency taskforce, led by the Federal Emergency Management Agency.

This will go to fund many of the shelters that will be used to house these youth until their parents or guardians can be located. Most stay in these homes awaiting their trials and then ultimately to be deported. If no relatives can be found then they will be turned over to the foster care system.

These are all short term measures for a problem that will only escalate. Vice President Joseph Biden Jr. met with the leaders of the Northern Triangle and Mexico in the hopes that he can quell the recent rumors that the U.S. was relaxing its borders and allowing women with children across.

In a speech he gave to these leaders, he said, “The United States recognizes that a key part of the solution to this problem is to address the root causes of this immigration in the first place. Especially poverty, insecurity and the lack of the rule of law, so the people can stay and thrive in their own communities.”

He went on further to say that American would be donating $255 million dollars to Central America to assist repatriation programs for deportees, improve prosecution of criminal street gang members, and expand youth programs to reduce gang recruitment.