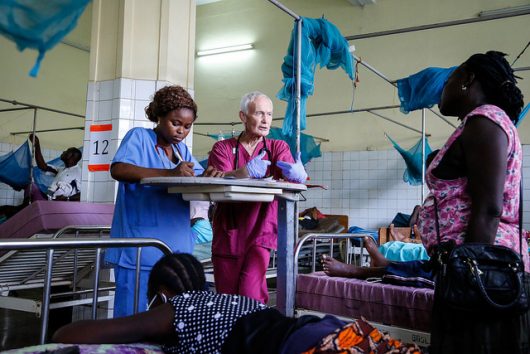 Beginning in 2014, the small West African country of Sierra Leone was subject to a devastating Ebola outbreak. By 2016, the outbreak was mostly contained, but due to the highly infectious and lethal nature of Ebola, the nation experienced a variety of long-term impacts. Between 2014 and 2016, there were 29,000 reported cases and over 11,300 deaths throughout West Africa. Of note, Sierra Leone lost 7 percent of its healthcare workers as a result of the outbreak.

The Ebola crisis carved out a massive chunk of Sierra Leone’s economy. At the height of the outbreak in 2015, 9,000 wage workers and 170,000 self-employed workers lost their jobs. Guinea, Liberia and Sierra Leone reported a combined $2.2 billion in losses as a result of the societal and economic damages caused by the Ebola outbreak, with Sierra Leone shouldering an estimated $1.9 billion of this amount. By the conclusion of the outbreak, Sierra Leone had experienced a significant reduction of cross-border trade, agricultural output and private sector growth.

Over the past two years, the Food and Agricultural Organization of the United Nations (FAO) has provided Sierra Leone with a variety of agricultural aid platforms that have contributed to Ebola recovery efforts. From March 15 to March 19, 2017, the FAO held a succession of agricultural disaster preparedness meetings in conjunction with Sierra Leone’s Office of National Security (ONS). According to the FAO representative on hand, these meetings were designed to “Increase the resilience of livelihoods from disasters.” They focused on agricultural disaster resistance (to floods in particular) but were intended to potentially bleed into a variety of other sectors to ensure that Sierra Leone’s economy becomes more resilient as a whole to national crises.

Women were disproportionately impacted by the Ebola crisis in Sierra Leone. To aid in women empowerment, the FAO supported an initiative to provide funding for women-led farming co-ops. Local female-led farming groups testified that the funding allowed for a rebound in crops after the Ebola crisis. These, among a variety of other initiatives, have solidified the FAO as a key player in supporting Ebola recovery efforts in Sierra Leone.

USAID, with the help of local NGOs, is another key player that has assisted with Ebola recovery efforts in Sierra Leone by contributing cash transfers to small businesses. These transfers have reached 360,000 vulnerable people in the region, which has aided them in regaining their footing after the Ebola crisis. Alongside these cash transfers, USAID has contributed vouchers for seeds that have resulted in increased output for the agricultural sector in Sierra Leone.

With assistant from national and international organizations like the FAO and USAID, Ebola recovery efforts in Sierra Leone have boosted cross-border trade, agricultural output and private sector growth.