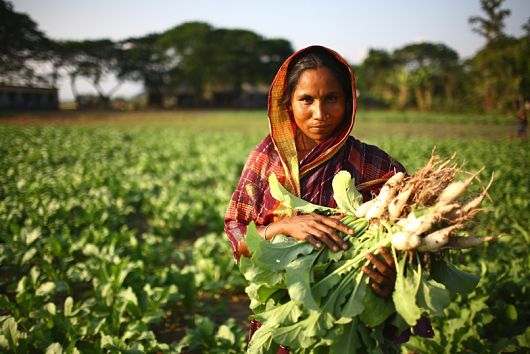 With so many important social justice issues to be aware of, it is extremely helpful when the progress of several areas at once can be monitored with only one tool.

The Women’s Empowerment in Agriculture Index (WEAI) ties together the importance of advancement in the agriculture sector and the involvement and empowerment of women in the same area.

The Index was developed jointly by Feed the Future, USAID, IFPRI (International Food Policy Research Institute) and OPHI (Oxford Poverty and Human Development Initiative) as a way of monitoring the success of the Feed the Future Initiative, and that is what makes it unique: The empowerment of women was not tacked on as a side note or as a positive subsidiary effect of the larger goal. Rather, the success of the Feed the Future programs depend on the equitable treatment and fair status of women.

The index debuted in Bangladesh, Guatemala and Uganda in 2012, with the intent to use it for further tracking of the influence of programs. While the tool itself is designed primarily to monitor and evaluate women’s empowerment levels, it is the crucial first step toward making a difference. Once data is generated about a problem, it can be approached with a better understanding of how to solve it, as well as increase awareness and support for fixing it.

So how is “empowerment” defined and measured?

Clearly, the concept is extremely personal. It is something that can be discussed in a very inspired but unspecific way. One Guatemalan woman, for example, said, “Being empowered means that the woman can do things too, not just the man.” To others, it is more about their position within a community. There are a lot of factors that affect what “empowerment” means to a person.

Do empowered actions count if they’re being encouraged, or even enforced, by an outside force? Is empowerment more of an individual or a collective concept? How can such a flexible idea be measured and expanded upon across such a vast range of cultures, ideologies and physical circumstances?

Answering this question is made easier by considering women’s empowerment in the specific context of agriculture. The Index is comprised of two parts: The 5 Domains of Women’s Empowerment (5DE) and the Gender Parity Index (GPI).

The 5 Domains of Women’s Empowerment are the following: role in the production of crops, access to resources, level of income, role in leadership positions and availability of time. Women are considered “empowered” if they meet particular thresholds in four out of five of these areas.

The idea of using one index to measure progress in two separate areas might seem unusual, almost non sequitur. But research done by the UN’s Food and Agricultural Association (FAO) has shown that agricultural productivity increased by 20 to 30 percent when access to agricultural resources was equalized between men and women.

By tying important goals together and creating a way to monitor their progress, the WEAI is helping the movement towards shaping a better world.