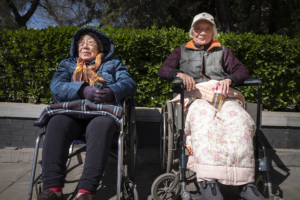 The aging crisis in China will become a key concern for the country, as “the population aged over 70 years in China is projected to reach [more than] 300 million in 2060.” China is the fastest aging country in the world, but sources show that it struggles to maintain the necessary infrastructure and policies to accommodate its growing elderly population. The World Health Organization reports that an aging population requires different public health and socioeconomic support than a more evenly distributed population does. At the moment, China does not have a well-developed social security net for its elderly. However, studies estimate that the GDP amount spent on services such as pensions, medical care and welfare will need to nearly quadruple by 2050 to meet the needs of China’s population.

China’s large aging population is largely attributed to its low birth rate as a result of its one-child policy. The policy, which was in effect from about 1980 to 2015, significantly reduced birth rates. A primary effect of the policy is that the population no longer mirrors a standard age distribution or “population pyramid.” Instead, there are more people who are aged 50-54 than those who are aged 35-39.

Generally, scholars view a youthful population pyramid, where there are more people under age 25, as a better indicator of a nation’s health and longevity. China’s population, however, represents an aging nation, in which a key concern is that by 2050, the working-age population will be less than 60% of the total, leading to severe economic consequences. The aging crisis in China remains a key area of concern for the government, which is forming new policies to combat the issue.

Another issue is that many seniors, especially those who are lower income, reach the age of retirement without having enough savings built for retirement. If a person reaches retirement age without a healthy pension or adequate savings, they must either rely on others or, in the worst possible instances, succumb to conditions of poverty.

The same article cites a 2013 study done by Peking University reporting that “only 3% of respondents had a commercial pension and just 0.2% had a private pension.” An aging population can be a sign of increased access to health care and education, but because of China’s current and past enacted policies, a significant revamp of social policies is necessary to accommodate the aging population.

Moreover, limited access to education and rural living is linked to declining cognitive health. Though the World Health Organization reports that across China’s geographic regions, 75% of older people suffer from noncommunicable diseases as of May 2021, China’s poor and low-income populations struggle most with this issue as they have limited access to quality health care.

Research shows that there is significant regional and urban-rural disparity in China regarding economic, social and health issues. Poorer, rural communities have reduced access to care that would enable healthy aging. The COVID-19 pandemic in China has only exacerbated these challenges.

Once the Chinese government and Chinese academics began to see the long-term impacts of the one-child policy, many groups began prioritizing care for the elderly to begin to repair the aging crisis in China. A study done by Peng Nie and others found that from 2011 to 2015, statistics point to an improvement in healthy aging.

However, there are still significant geographical disparities that groups are seeking to address, such as the link between healthy aging and higher education or the link to higher socioeconomic class.

A positive sign is that China ended its one-child policy in 2015, expanding it to two children, and later, expanding it to three. This is a reassuring sign that China recognizes its aging health crisis, though implementation of policy to help Chinese citizens must be developed as well. Abandoning the one-child policy means that the age breakdown of the Chinese population may even out over the next few decades.

Additionally, the National Center for Gerontology (NCG), established in 2015 and located inside Beijing Hospital, focuses on preventative and control measures related to the aging crisis in China. This manifests in the form of research, training of medical professionals and the prioritization of health services for older people in remote areas.

The NCG published journals and established the National Plan for the Elderly Health Service System (2019–2022), which seeks to solidify a course of action for China. Among other goals, the NCG raises awareness for geriatric issues and encourages people to become involved in geriatric care.