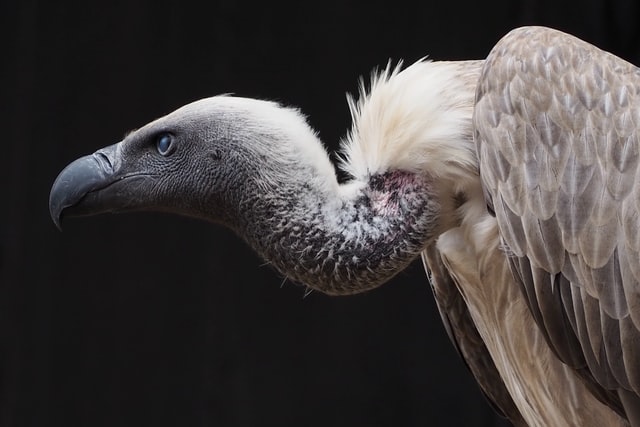 Of the 22 unique species of vultures, the International Union for Conservation of Nature (UCN) categorizes over two-thirds as near threatened, threatened, endangered or critically endangered. Seven of the 11 African vulture species are endangered or critically endangered. Vultures face a variety of threats across Africa, including direct and indirect poisoning due to poaching and human-wildlife conflict. However, African vulture poisoning does not just affect the birds themselves; it also affects human populations.

In just three generations, populations of endangered African vultures have plummeted by more than 80%. Because females may only lay a single egg in two years and hatchlings don’t reach sexual maturity for at least five years, this population trend may bring several species of African vultures to the brink of extinction.

Vultures play an important role in their natural environment. They can consume over two pounds of meat per minute, making them the most effective of all vertebrate scavengers. Their acidic stomachs allow them to consume diseased animal carcasses without any harm to themselves. This unique function makes vultures essential for recycling matter in an ecosystem as well as reducing the spread of diseases like anthrax, rabies and tuberculosis and bacteria.

Vultures also prevent other scavengers from spreading disease. For example, in 2006, vultures in India, Pakistan and Nepal fed on diseased cows treated with an anti-inflammatory medication. This led the vulture population to decline by 96%. Further, the population decline led to an increased population of carrion-eating feral dogs, causing human rabies contraction to skyrocket. This led to approximately 48,000 human deaths.

African vulture poisoning, intentional or not, happens more than one might think. An interdisciplinary study conducted by the National Socio-Environmental Synthesis Center (SESYNC) out of the University of Maryland (UMD) by researcher Meredith Gore and collogues from organizations including the Peregrine Fund and the Endangered Wildlife Trust made this clear.

The researchers focused on the Great Limpopo Transfrontier Conservation Area (GLTFCA) in southern Africa. They found that farmers there use herbicides and pesticides as poisons. The chemicals they use often contain substances known to pose environmental and human health risks. However, farmers lace water and dead animals with these poisons to kill large predators that attack their livestock. Some also target large herbivorous animals like elephants that may trample or otherwise damage their crops. Although outside the intended purview of these poisons, vultures die as a result of consuming the victims after they die.

The researchers also found intentional African vulture poisoning by poachers, predominantly in eastern Africa. Circling vultures can signal the death of a protected animal to law enforcement, so poachers may lace a carcass with poison to kill the birds as a self-protective measure. More than 500 vultures may feed on and die from a single poisoned elephant carcass. Gore and her collogues believe that a solution to African vulture poisoning will rely on collaboration between local agencies, non-profits and science and criminology experts. They propose several measures to reduce poisoning.

Furthermore, the researchers suggest reducing rewards related to vulture poisoning. This could mean withholding livestock and crop damage compensation when farmers poison vultures. Similarly, the researchers endorse provocation reduction measures like education about non-poisonous measures of human-wildlife conflict resolution. They do note, however, that the underlying socioeconomic issues linked to African vulture poisoning include poverty, food insecurity and resource deficits. This means that solving poverty may be key to ending African vulture poisoning.

The Future of African Vulture Poisoning

Gore and her colleagues also believe that governments should minimize valid excuses for poison use. This may include creating cheap or free chemical disposal programs and responsible corporate buy-back schemes. These would operate in addition to publicized national and regional poison response plans. Finally, the researchers encourage increasing incentives to conserve vultures by prioritizing local conservation efforts that are culturally appropriate and account for traditional and indigenous knowledge.

Without intervention, vulture population decline will lead to the spread of disease and disrupted food chains, both of which have far-reaching ecological and human-health consequences. Fortunately, scientists, criminology experts, community groups, governments and non-profits have a myriad of ways to inspire engaging and effective solutions to reducing African vulture poisoning. By doing so, they will reduce the spread of disease that plagues many African countries.