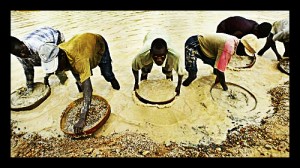 Africa is home to some of the world’s largest diamond mines, with 11 countries throughout the continent engaging in diamond extraction industry. The diamond industry has been a major source of wealth for nations like Botswana, South Africa and Angola.  Approximately $8.5 billion of the $13 billion in rough diamonds are produced in Africa, while global diamond jewelry sales total $72 billion per year.  In recent decades, the industry has been under intense scrutiny for some of the barbaric conditions in which the diamond mines operate.

To gain control of diamond mines, rebel groups, governments, and corporations, have battled each other often engaging in war-like tactics to extract the coveted resource.  The Hollywood film “Blood Diamonds” has featured this conflict and helped raise awareness for the millions of Africans who have been killed, injured or displaced throughout the years.

In 2007, in response to this struggle, Hip Hop legend Russell Simmons and leaders of the Diamond and Jewelry industry created the Diamond Empowerment Fund (DEF.) The DEF hopes to transform and empower individuals and societies within the diamond producing countries through education.  To accomplish this mission, the Diamond Empowerment Fund will work with partners in the industry to create innovative product designs where sales help support education initiatives.

Three major organizations that serve as beneficiaries for the DEF include CIDA City Campus, the African Leadership Academy (ALA) and Botswana Top Achievers.  The DEF has been able to empower 1,800 students through its three beneficiary organizations.

In 2009, the Diamond Empowerment Fund made its first grant available to students at the ALA.  The $4.2 million grant funds the DEF Scholars Scholarship Program.  28 students throughout the continent were able to attend universities such as Harvard, Yale, Cornell and Duke, among others.  On the Diamond Empowerment Fund website, one can read stories from individual students that have benefited from the charity of the DEF and its partners.

The DEF also sponsors the GOOD Awards, which recognizes individuals and corporations that exemplify outstanding leadership in promoting sustainable development, good corporate citizenship and economic opportunity within Africa.  In its third year, the GOOD Awards featured dozens of celebrities and diamond industry executives to raise money in support of the DEF.

As the Diamond Empowerment Fund continues to grow, thousands of children across Africa will get the opportunity to transform into future leaders and help their countries prosper.