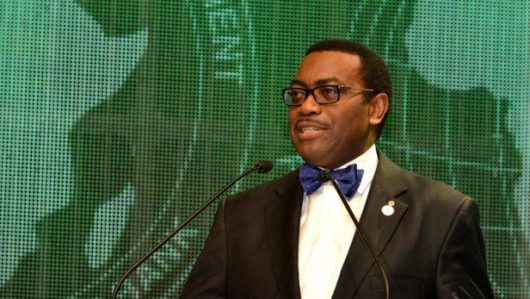 What do you get when you combine the President of the African Development Bank, the Minister of Agriculture of Nigeria and an active member of the Alliance for a Green Revolution in Africa? In this case, they are all one person. Dr. Akinwumi Ayodeji Adesina was deservedly recently named the 2017 World Food Prize Laureate for his work in transforming African agriculture and solving Africa’s food issues.

Growing up in poverty himself, Adesina’s mission to improve farming in Africa has the potential to lift millions out of poverty. He studied Agriculture at the University of Ife in Nigeria, and eventually went on to earn his Masters and Ph.D. in Agricultural Economics at Purdue University in Indiana, U.S.A.

A firm believer in making a better world for the next generation of Africans through education, health and economics, Dr. Akinwumi Ayodeji Adesina has been a political pioneer for millions of farmers throughout Africa. He works on everything from financial assistance for farmers to access to agricultural technologies and investments in agriculture.

Dr. Adesina believes that fertilizer and hybrid seeds can be some of the greatest assets to African agriculture in the coming years. He had a leading role in organizing the African Fertilizer Summit, which “was one of the largest high-level meetings in history to focus on Africa’s food issues,” according to CNBC. The mission of the summit? “Combating poverty and food and nutrition insecurity in Africa, and to direct our attention to key decisions that can move us forward with a view to eradicating hunger by 2030.”

With his Electronic Wallet System technology (or E-Wallet), Adesina has been able to cut out corrupt distributers, giving farmers access to seeds and fertilizer directly from the source. This mobile phone-based technology improved the lives of 14.5 million farmers and their families in its first four years.

Dr. Akinwumi Ayodeji also co-founded the African Leaders for Nutrition Panel with John Kufuor (former President of Ghana) with a goal to end malnutrition and stunting.

In 2011, he helped orchestrate the largest bank negotiation to aid farmers and agribusiness ever attempted in Africa, convincing the Central Bank of Nigeria to use $350 million in creating a facility that would pull $3.5 billion from commercial banks into agriculture.

At the 50th anniversary celebration of the International Institute of Tropical Agriculture in July of this year, Adesina announced that the African Development Bank (of which he is president) would be investing $24 billion in agriculture in Africa over the next 10 years. Adesina hopes that the two institutions can work together to transform African agriculture into being self-sustaining, with the potential to feed the entire continent within 10 years.

In a speech delivered last year at the Forum for Agricultural Research in Africa, Dr. Adesina exposed the importance for improving agriculture in Africa and its effect on the world.

“Africa needs to invest more in science and technology to become more efficient and competitive in agriculture – and to diversify rapidly its economies. For Africa must fully unlock its immense agricultural potential. That potential is massive: Africa has 65 percent of all the arable land left in the world to feed 9 billion people by 2050. Africa cannot eat potential.”

These powerful words by such an influential man ring true, and hopefully more technological and scientific developments will come soon and impact Africa as positively as Dr. Akinwumi Ayodeji’s.