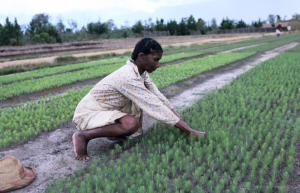 Susan Rice’s approach to foreign aid has formed by her listening to her colleagues’ advice. Her approach is to negotiate and implement policies to help textile workers, small farmers and other people in need.

According to her latest 2019 book, “Tough Love: My Story of the Things Worth Fighting For,” Susan Rice grew up in Washington, D.C. Her first job in 1979 at age 14 was as a Democratic page in the U.S. House of Representatives. She graduated high school and took home many awards from the National Cathedral School NCS in D.C. After this, she was a fellow at the Brookings Institute and an undergraduate at Stanford University.

She studied at Oxford in the U.K., where she earned her M.Phil. (masters) degree in international relations. Afterward, she went on to earn her Ph.D. During that time, her thesis “The Commonwealth Initiative in Zimbabwe, 1979–1980: Implications for International Peacekeeping” won the 1991 Chatham House–British International Studies Association Award for the most distinguished doctoral dissertation in international relations in The U.K. She went on to be the youngest black woman to serve in a presidential administration.

Susan Rice’s approach to foreign aid has involved her putting her colleague’s advice into practice. When she first started as assistant secretary of state for African affairs, her colleague Ambassador Prudence’s advice was to pay attention to policy outcomes, not the bureaucracy.

During her years in the Clinton Administration, Susan Rice worked hard toward the African Growth Opportunity Act (AGOA), which passed Congress in 2000. In 2015, Congress updated and extended the program through 2025. The AGOA requires countries to remove obstacles to U.S. trade, implement poverty reduction procedures, fight corruption and bolster human rights.

Poverty is reducing among women through the creation of jobs and through new businesses that women own. The African Women’s Entrepreneurship Program (AWEP), which supports women who own businesses in sub-Saharan Africa, came to be because of the AGOA.

The Department of State also created an International Visitor Leadership Program (IVLP). This program sponsors a small group of African women business owners to come to the U.S. for a three-week intensive networking event to meet with leaders in bipartisan policy, industry and nonprofits. The support these women entrepreneurs receive helps create jobs and influence society. It lifts their communities out of poverty one job at a time.

Work as the US Ambassador to the United Nations

It had the intent of lowering or eliminating tariffs on imports and exports of participating countries, thus making it more affordable for them to produce, import and export. The affordability attracts businessmen and women and lifts people out of poverty by creating jobs in both the import and export country. This symbiotic relationship helps lift people out of poverty by the creation of these jobs. In 2014, according to Susan Rice’s speech, one-third of TPP participants were from the Association of Southeast Asian Nations (ASEAN). Indonesia, Malaysia, Philippines, Singapore and Thailand, Brunei Darussalam, Vietnam, Lao PDR, Myanmar and Cambodia all benefit from TPP.

How TTP and AGOA Impact People

Susan Rice’s approach to foreign aid is to negotiate and implement policies like TTP and the AGOA. According to The World Bank, TTP will increase the wages of poor under-skilled textile workers in Vietnam by over 14% by 2030. African countries could also benefit from TTP and especially African women.

According to The World Bank, women make up most of the small farmers in Africa. These women carry goods across borders where they sometimes meet with opposition in documents, regulatory requirements and tariffs.

As Brookings reported, Africa is benefiting from the AGOA. In 2014, African countries exported nearly $1 billion worth of textiles to the U.S. creating jobs for poor under-skilled workers, especially women.