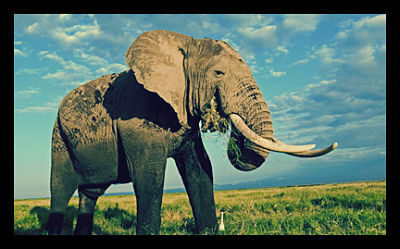 The Environmental Investigation Agency (EIA) claimed this week that the Internet giant Google has over 10,000 advertisements for ivory products on its Japanese shopping site. The EIA has written to Google asking them to remove the ivory advertisements, but so far nothing has been done.

The EIA made the announcement this week at the 16th annual Convention on the International Trade in Endangered Species (CITES) held in Bangkok. Other conservation groups, including the International Fund for Animal Welfare, have recently uncovered illegal sales of ivory and other wildlife products on websites such as eBay. The anonymity of Internet-based sales services has clearly fueled the increase in international commerce of illegal animal goods.

Google’s ivory advertisements are a matter of extreme concern for several reasons. First, ivory comes from African elephants, which are internationally recognized endangered species. According to The Guardian, the vast majority of African forest elephants, whose population once numbered 5 million, have been poached for their ivory-containing tusks. The population of this endangered species is two-thirds what it was a decade ago. Should this trend continue, the African forest elephant will potentially become extinct within the next decade.

Of secondary importance is Google’s hypocrisy in the matter. The generally progressive and environmentally conscious company has so far failed to act to remove the ivory advertisements. Company policy states, “Ads for products obtained from endangered or threatened species are not allowed on Google.” Yet, the ads are still up and running, fueling demand for products that threaten the existence of one of the world’s most vulnerable creatures.