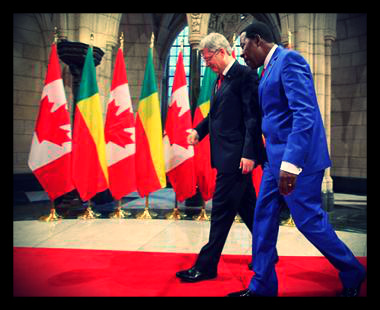 It seems that global media has been bouncing back and forth between reports on Mali and Syria. Both countries have been submerged in the mountainous political upheaval that many of us living here in the United States and other peaceful countries are not able to comprehend, due to no fault of ours. One way in which observers of these revolutions (yes these are revolutions and not merely protests or civil strife as the media chooses to call them) can help make a difference is by choosing on what issues to focus both their money and attention on. Canadian Prime Minister Stephen Harper took the first step towards the right direction earlier this week at a global donor meeting in Ethiopia. Canada has made humanitarian efforts.

According to the Canadian media, Canada’s $13 million aid to Mali for humanitarian purposes stood out among the millions of dollars pledged by other countries specifically for combat resources and other military costs for AFISMA (the African coalition of about 20 countries and 3500 troops fighting against the Islamists in Mali).

However, the BBC notes that donations from other countries, such as the United States, Germany, and China, are also directed towards “Afisma, humanitarian assistance, logistics, improving security and the future development of Mali”.

Nevertheless, the Canadian government withstood arguments made on behalf of the African Union to put more money and troops into AFISMA’s military campaign. Prime Minister Harper made it clear that Canada will no longer be sending troops but instead “will continue its lifesaving work in Mali through humanitarian and development assistance”.

When political unrest creates such horrid living conditions in a country at war, it is understandable how concerned countries may be caught in the middle of choosing between military or humanitarian assistance. However, it can be viewed as a cycle, where choosing which end to start with makes the difference. By becoming involved at the ground level in the villages, schools, and health centers, outside aid can create stability, survival, and small patches of peace, which will hopefully create an internal domino effect. These acts may not remove the Islamist forces from the north in Mali, but they surely create a more constructive path with fewer deaths instead of instigating fighting with tank and arms donations.

As governments make decisions on where to funnel their money, the people of Mali will be patiently waiting. For them, other than becoming refugees, there is not much they can do against hunger and weapons. While keeping in mind the importance of political stability and the different ways to achieve it, the African Union and future global-donor meetings will hopefully not call for special meetings focused on collecting only a certain kind of assistance, especially when that assistance is not for the basic survival needs of the people of Mali.