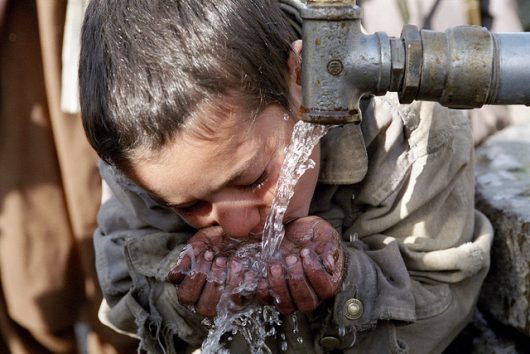 Water is a basic necessity for all life–it must be safe and clean for use. For the people of Afghanistan, water that is safe and clean is especially hard to come by. Fortunately, poor water quality in Afghanistan is a problem that both a global organization and its Afghan partners are working to resolve.

After more than a decade of armed conflict and neglect, Afghanistan has a problem with getting sanitary water to its people. The country of 32.5 million people gets its water from rivers and underground supply, which is reliant on rainfall and snow.

In recent years, climate change has caused a reduction in precipitation, resulting in a drop in water levels of six meters.

Other major obstacles stand in the way of improving the water quality in Afghanistan. Not only is there less water, but the water that is available is contaminated. In most major cities, underground water supplies have been compromised, due to the lack of canalization, proper waste management and proper waste disposal.

In big cities, hospitals commonly bury their waste underground or leave it above ground. Medical waste can contain poisons and infectious inhabitants, seeping into the underground water supply over time.

However, change is underway to improve this dire situation.

The Improvement of Water Quality in Afghanistan

Domestically, the Afghan Urban Water Supply and Sewerage Corporation has been working for the last 30 years constructing 40,000 clean water posts, with access for one million people. But, the Afghanis cannot do it alone. Much work is still to be done to meet all water needs in Afghanistan.

External help is underway from GIZ, a German company that specializes in developing solutions to global problems. With the backing of the German Federal Ministry for Economic Cooperation and Development, GIZ is making great strides.

In collaboration with the Afghan Urban Water Supply and Sewerage Corporation, GIZ has developed and is implementing a massive plan to decentralize and overhaul the Afghani water infrastructure. They will work with and train Afghani workers to complete the project and independently maintain it, also creating a sanitation and management program for water in Afghanistan.

Between 2011 and 2013, GIZ trained around 2,000 employees from the institutions involved. As a result, they are now able to better perform the work necessary improve water quality in Afghanistan.

Now that the workforce has been trained, substantial progress is being seen.

From 2007 to 2013, the number of households with a newly connected water supply in Kunduz, a major city in northeastern Afghanistan, rose from 370 to 7,700. This represents about 75 percent of Kunduz’s population. Kunduz is only one example of a trend spreading around the country.

Currently, newly constructed water infrastructure is not only becoming self-sufficient, but also now has the ability to self-fund more growth. In 2012, the Afghani government introduced a water tariff, which significantly increased the income of the water infrastructure. In some cities, Afghanis are willing and able to pay for their new access to clean water.

Since then, in the major cities of Kabul, Harat and Kunduz, the proportion of water that is paid for has risen greatly. As a result, the cities of Herat, Kunduz and Mazar-e Sharif have built and are operating six new wastewater plants. Big change is taking place for the better.

Not long ago, the majority of Afghanis were desperate for clean water. Today, with the help and intervention of Germany, the major components that led to the water problem in Afghanistan are on the way to being improved. The work being done is changing lives, communities and cities across Afghanistan.