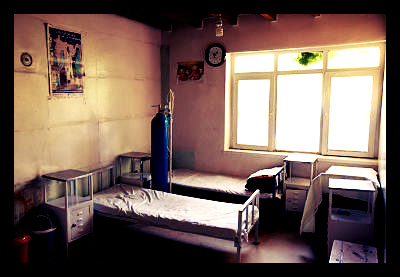 Between the dark valleys and snow-capped peaks of Panjshir Valley, Abdul Jalil exits the emergency room of the new district hospital.

Grimly shaking his head, he remarks, “People like to drive fast in my country. Yes, many of us would be lost without this good place.” Violent winds and sharp turns along the valley protected it from past Soviet and Taliban invaders. Today, though, the highway threatens the safety of Panjshir Province.

The Afghan Ministry of Health partnered with the World Bank and the Afghanistan Reconstruction Trust Fund (ARTF) to build the hospital. In one year, this partnership expanded the limited health center to a 40-bed hospital. This development in the health sector targets the most vulnerable populations: women, children and those in poverty.

“Now, we have trained doctors here every day, every hour and we are well equipped to face many challenges,” reports Dr. Jamshid Murid, a specialist physician. “Critically ill babies, children with appendicitis, motor vehicle accidents, we can handle so much more.”

Rukha Hospital now employs two general physicians, two surgeons, three midwives, a dentist, a specialist physician, and an ear, nose and threat specialist. More than 100 residents may visit the hospital a day. The hospital can afford to treat these patients as a result of World Bank and ARTF funding.

To accommodate an estimated population of 150,000, the hospital may need continued expansion. However, high turnover plagues the hospital, according to Mohammad Reshad of the Ministry of Public Health in Panjshir.

The gynecologist, for instance, recently left the hospital. Dr. Mahmoud Karamkhil, the newly appointed head of hospital, considers the high turnover common. The government dispatches doctors the most rural regions, but often the limited development poses too great of a challenge.

However, some patients travel from the capital, Kabul, to receive care from doctors at Rukha Hospital. Many doctors commute from Kabul, driving more than three hours to serve patients at the remote hospital. Chief surgeon Dr. Amir Mohammad Khuram lives in Panjshir during the week and travels to Kabul for his vacation time. Rukha now offers more high-quality service than other medical centers, asserts Khuram.

Khuram has performed more than 190 operations in the first year. With steady hands, he operated on nearly 80 patients in the past few months. Though the government-regulated salary is lower in this province, he believes serving those in need “should be our duty.”

Karamkhil attributes the success of the hospital to the dedication of doctors like Khuram.

The United States Military prepares to withdraw from Afghanistan, but many Panjshiris doubt the strength of the Afghan Army. Former militia members “have plenty of weapons” to protect the valley from Taliban insurgents.

In this uncertain time, the hospital serves a critical purpose: it offers stability and security to the men and women of a forgotten valley.